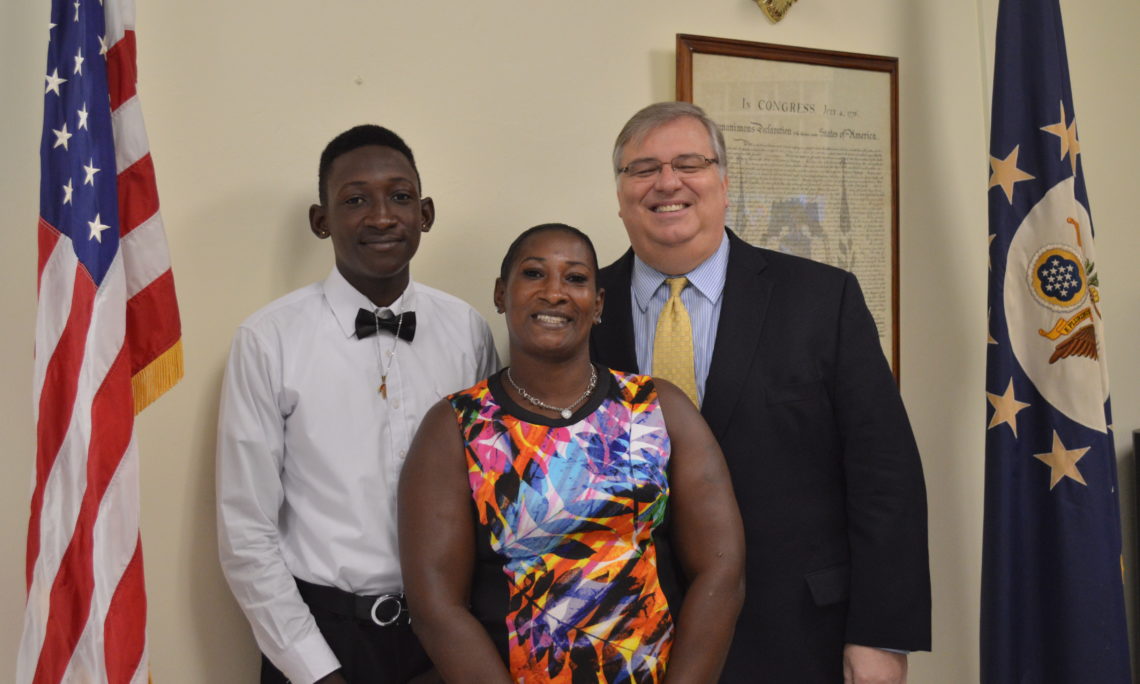 Following his three week exchange experience in the United States, Youth Ambassador, Gary Telesford of Woburn St. George’s met with U.S. Embassy St. George’s Principal Officer, Stephen Frahm. Gary was afforded this opportunity through the United States Exchange Program and had the opportunity to visit New York, Vermont, Oklahoma and Washington DC as part of a three week program that engaged youths from a number of countries.

The experience gave the Youth Ambassadors the opportunity to experience life in America, interact with their host families as well as involvement in number of leadership building exercises and skills. Volunteerism was also a major part of Gary’s experience and the program gave him three opportunities to volunteer at the Tulsa Dream Center and also with differently –abled persons, an experience which left him better able to understand on how to assist persons in need and ideas on how that can be implemented in Grenada. Gary remarking on the role Volunteerism plays, in helping persons affected by disasters, like we see being experienced in Caribbean, said “Volunteering allows you to help a person after a crisis, to return to sustaining themselves”. The experience of the Youth Ambassadors also allowed them the opportunity to dialogue with LGBT activist groups that helped them understand that it is important to respect the personal choices of everyone.

Gary’s Youth Ambassador experience also allowed him to meet persons from the United States, United Kingdom, Iraq, Guyana, Suriname as well as other Eastern Caribbean Countries. He tasted the diverse cuisines available throughout the American experience, including the Japanese restaurant Osaka where the Chef’s culinary artistry was on display. Gary’s three week tour culminated in the nation’s capital, Washington DC where he toured Museums, Capitol Hill and saw the White House.

Gary said of the experience that it “changed his life for the better” and was elated that he pushed past his initial fears of being rejected and applied for the program and he is thankful for the support of his mother and the advice he received from someone in his community, that it is better to try and fail, than fail to try. The experience has opened up a whole new world to him and he looks forward to implementing his Youth Ambassador project focused on addressing Drug Abuse in his community.