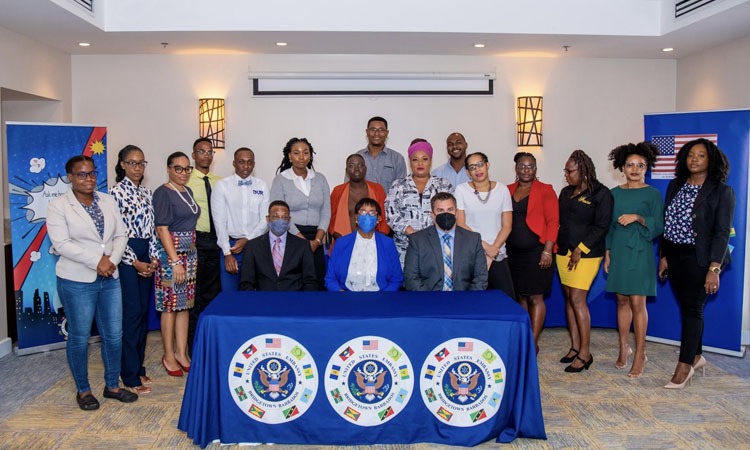 Young Leaders of the Americas Initiative (YLAI) Fellows from across the Eastern and Southern Caribbean were challenged by the Honorable Minister C. Sandra Husbands to leverage the strengths of the CARICOM Single Market Economy (CSME) and “be the catalyst for a new vision of hope and prosperity” for the region.  The Honorable Minister delivered these remarks at the opening of a two-day U.S. Embassy workshop March 10-11 for 15 entrepreneurs from Barbados, the Eastern Caribbean, and Guyana.  The YLAI Fellows will depart in June for their five-week intensive business development program in the United States.  “Such need to work together as a region, and with the U.S. Embassy which has administered the YLAI programme for the Eastern Caribbean since its inception, bares testimony to possibilities of what can be achieved when there is singularity of focus.  Perhaps it is such a model of collaboration that would augur well for the future development of the region if for example our collective imagination can be deployed to address the challenges meted out to enterprises as a result of the negative effects of the COVID-19 pandemic,” explained Minister Husbands.

USAID Regional Representative Clinton White joined in welcoming the fellows to the next step in their entrepreneurship journey.  “Approach this opportunity with a growth mindset and know that even the largest and oldest companies in the United States need to continue to change and evolve to be successful.  I know that’s easier said than done, but there are more than 1,000 YLAI fellowship alumni who were once in your shoes and who now join in pulling for you to succeed,” Regional Representative White said in his opening remarks. The workshop, convened at the Courtyard Marriott in Hastings, prepared the 15 fellows for their upcoming exchange, which includes a professional placement with a U.S. company or organization in the United States and entrepreneurial leadership coursework developed by implementing partner IREX and Arizona State University.  The entrepreneurs will join a group of 250 fellows from across the Caribbean, Latin America, and Canada who were chosen out of more than 2,300 highly qualified applicants.  The 15 Eastern and Southern Caribbean participants lead businesses that span multiple sectors, including agriculture, education, food and beverage, and health and fitness.

YLAI empowers entrepreneurs to strengthen their capacity to launch and grow their ideas and effectively contribute to the social and economic development of their communities.  Since 2016, Caribbean YLAI Fellows have built networks, linkages, and lasting partnerships to attract investment and support their entrepreneurial ventures.