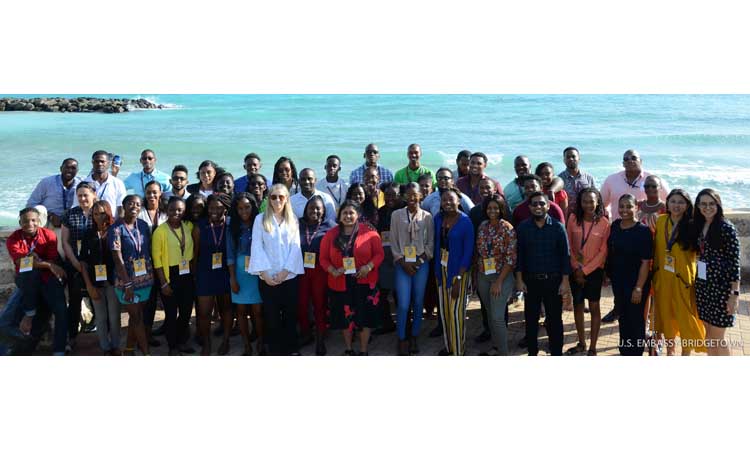 Deputy Assistant Secretary (DAS) in the Bureau of Western Hemisphere Affairs at the U.S. Department of State (DOS), Cynthia Kierscht, visited Barbados and St. Vincent and the Grenadines (SVG) between October 22-25, 2019.

During her visit, DAS Kierscht highlighted the many ways in which the United States and the Caribbean work together in sustainable economic growth, good governance, and the development of a vibrant civil society.

DAS Kierscht also met with youth ambassadors and leaders at the 1st Caribbean Youth Forum on Drug Use Prevention, an initiative led by the Organization of American States, the Colombo Plan Drug Advisory Program, and the Bureau of International Narcotics and Law Enforcement Affairs. She engaged with young leaders from across the region who will implement drug prevention plans in their respective communities.

As part of the U.S-Caribbean 2020 strategy to promote security, DAS Kierscht observed a joint training with the Barbados Defense Force and the embassy’s Regional Security Office. At her meeting with Minister of Foreign Affairs, Jerome Walcott, she highlighted US engagement with the region, such as the Caribbean Basin Security Initiative (CBSI), and disaster mitigation.  DAS Kierscht visited a waste management services plant carried out by local entrepreneur Corey Jackman, who is an alumnus of the Young Leaders of the Americas Initiative program.

In SVG, DAS Kierscht met with Prime Minister Ralph Gonsalves to highlight U.S. partnership with SVG in disaster relief and resilience efforts, U.S. humanitarian assistance to SVG, SVG’s upcoming tenure on the United Nations Security Council, and the U.S.-Caribbean 2020 Strategy.  She interacted with beneficiaries of the USAID-funded Liberty Lodge Rehabilitation Center. DAS Kierscht also met with Taiwan Ambassador, Calvin Ho to advance regional goals. During her luncheon with the Peace Corps volunteers of the island, she learned about all the work they are doing to help the people of SVG.

DAS Kierscht appreciated the opportunity to participate in multiple engagements throughout the week including press opportunities organized with the media of the islands.