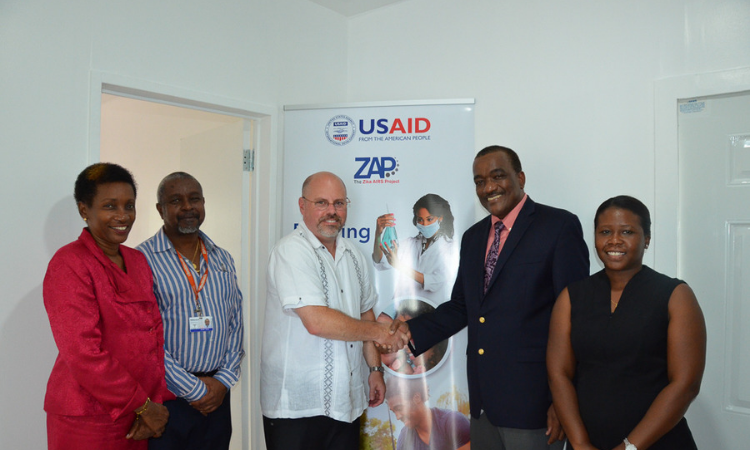 The Barbados Ministry of Health and Wellness has received additional support in controlling the spread of the Zika virus. On July 24, the United States Government handed over a mosquito insectary to the Ministry to facilitate the study and control of disease causing insects, particularly the Zika carrying Aedes Aegypti species.

The support is part of the United States Agency for International Development’s (USAID) Zika Airs Project which is being implemented across six eastern and southern Caribbean countries. The Project strengthens national vector control programs that monitor and eliminate mosquito populations, to control mosquito-borne illnesses, including Zika, Chikungunya and Dengue. Under the Project, Ministries of Health across the Caribbean also received technical assistance to strengthen capacity to measure and track the effectiveness of insecticides used to optimize public health mosquito control initiatives.

Addressing the handing over ceremony, which was attended by the Minister of Health and Wellness, Lt. Col. Jeffrey Bostic as well as regional and international health representatives, Senior Zika Advisor, Eric Baranick, said a key deliverable of the ZAP project in Barbados was the insectary being handed over today. “Insectaries such as this one are essential for cost effective mosquito monitoring and insecticide resistance testing. The aim is to develop a profile of insecticides that are effective against the Zika carrying mosquito in its various stages of development and to allow for insect species identification. These capabilities will foster a resilient public health system and promote early notification of mosquito-borne illness outbreaks,” he added.

Mr. Baranick also congratulated the Government of Barbados on this important health partnership and thanked the Minister of Health for the support he has personally afforded USAID’s Zika Airs Project. He also thanked the key partners in regional public health efforts, the Pan American Health Organization (PAHO) and the Caribbean Public Health Agency (CARPHA), who have ensured that regional guidelines for integrated vector management have been adopted across the Caribbean.