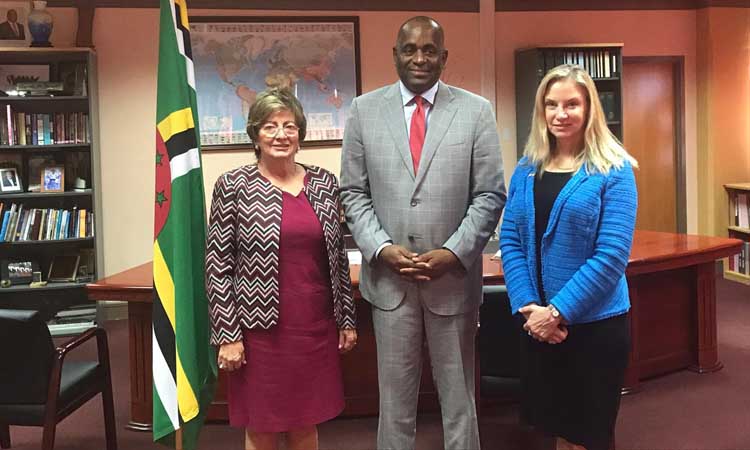 Bureau of Western Hemisphere Affairs Deputy Assistant Secretary (DAS) Cynthia Kierscht of the U.S. Department of State and U.S. Ambassador to Barbados, the Eastern Caribbean and the OECS, Linda Taglialatela, visited Dominica January 15 and 16 to meet with Prime Minister Roosevelt Skerrit and his new cabinet members to discuss opportunities for continued partnership.  DAS Kierscht and Ambassador Taglialatela congratulated Prime Minister Skeritt on his re-election in December.  The U.S. delegation recognized the cooperative relationship of Dominica and the United States and discussed the U.S.-Caribbean 2020 Strategy, a multi-year strategy to increase the security, prosperity, and well-being of the people of the United States and the Caribbean.  They also encouraged the Prime Minister to maintain his commitment to implementing the electoral reform.  DAS Kierscht and Ambassador Taglialatela later met with Dominica’s Foreign Affairs Minister Kenneth Darroux and welcomed Dominica’s support for democracy in the region.  They also discussed the upcoming U.S.-Caribbean Business Conference and Regional Trade Mission, which the U.S. Department of State will co-host in Barbados with the U.S. Department of Commerce from May 31 to June 2, 2020.

The U.S. visit comes as the United States seeks to increase engagement with Dominica and the Caribbean region and to enhance regional security cooperation, advance democratic principles, and increase trade and investment.  DAS Kierscht and Ambassador. Taglialatela expressed the hope that their visit would reaffirm the U.S. commitment to forging stronger bonds with Dominica.