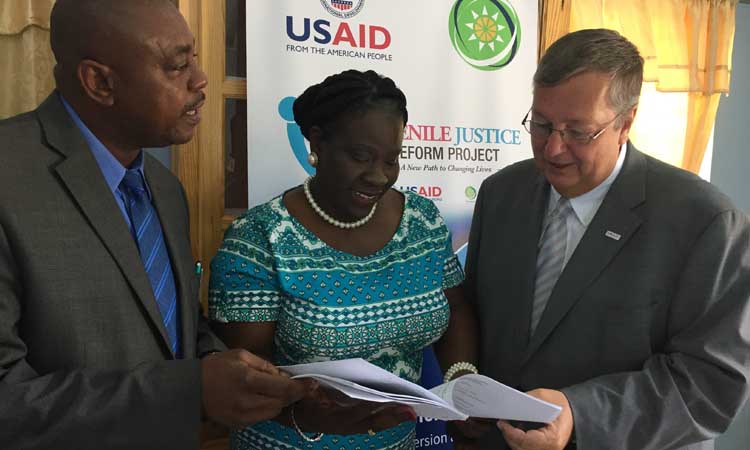 At-risk youth in St. Vincent and the Grenadines are poised to benefit from improved services at the newly-renovated Liberty Lodge Boys Training Center. With the support of the United States Government, the facility, which had been closed since 2015, re-opened on Thursday, March 1, offering services in fully upgraded facilities.

On Monday, March 19, the Government of St. Vincent and the Grenadines, under the aegis of Frederick Stephenson, Minister of National Mobilization, hosted a ceremony to commemorate the re-opening of Green Hill facility. Christopher Cushing, Mission Director of the United States Agency for International Development (USAID) Eastern and Southern Caribbean, lauded the Government’s commitment to ongoing juvenile justice reform efforts under USAID’s Juvenile Justice Reform Project, being implemented in partnership with the Organisation of Eastern Caribbean States.

“I salute both the Government and other stakeholders for your commitment and dedication to addressing the needs of children, particularly those who are in greatest need of assistance.  I applaud your work on the creation of a new Child Justice Bill, and your efforts to foster a new approach to juvenile justice that focuses on rehabilitation, restoration and reintegration.  It has been proven that this approach results in greater success,” said Mr. Cushing.

Mr. Cushing also reiterated the United States Government’s commitment to partnering with regional Governments to support youth who are most vulnerable. “It is our hope that the programs offered at the newly-renovated Liberty Lodge Centre, will help prepare young men to thrive while contributing to their families and communities.”  He underlined this point while urging youth to make the best use of their time at the rehabilitation facility.  “Remember that this is not the end, but it is just the beginning.  Be focused and determined to create your best lives, beginning today,” he advised.

The Opening ceremony was attended by Government representatives, OECS officials, members of the legal fraternity, and representatives of justice organizations that serve and protect children.