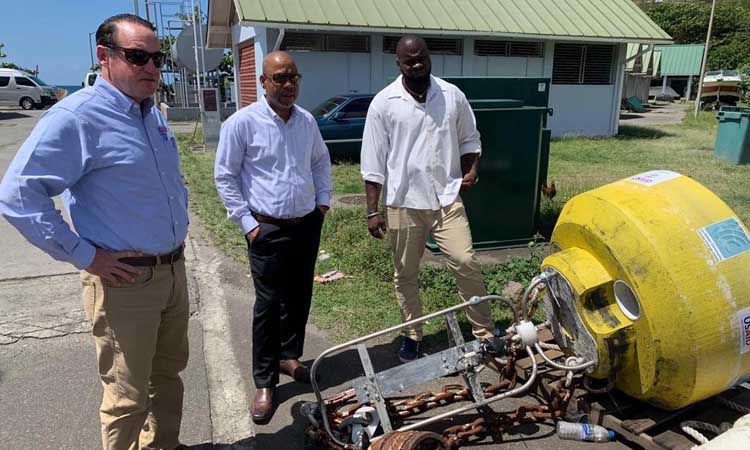 Deputy Chief of Mission at the U.S. Embassy, Joaquin Monserrate looks at one of the donated equipment.

The United States Agency for International Development’s Eastern and Southern Caribbean Office (USAID/ESC) and the Caribbean Community Climate Change Centre (5Cs) on Friday, February 21, 2020, handed over one Automatic Weather Station (AWS) and one Coral Reef Early Warning System (CREWS) valued at over US$100,000 to the government of St Lucia under the USAID Climate Change Adaptation Program (USAID-CCAP). The equipment will form part of an expanded network of weather and climate data collection devices across the Eastern and Southern Caribbean placed under the project.

One of the key objectives of the CCAP is to build the capacity of regional, national, and local partners to generate and use climate data for decision-making in government and beyond. The CCAP has delivered critical equipment across the region since its inception.  This includes 50 AWS, five CREWS, a Light Image and Detection and Ranging (LIDAR system) housed 5Cs in Belize for regional use, and related data storage equipment.

Speaking at the handing over on Friday, Mr. Joaquin Monserrate, Deputy Chief of Mission at the U.S. Embassy Bridgetown, highlighted the importance of having sound climate and marine related data to protect the countries assets.  He noted, “The automatic weather station and coral reef early warning system have been placed in strategic locations to provide data and contribute to evidence-based decision-making.  The use of these systems will increase the capacity of St. Lucia to anticipate and manage the impact of changing weather patterns – both on land as well as in the marine environment.”

Dr. Colin Young, Executive Director of the Caribbean Community Climate Change Centre spoke to the use of data from a regional perspective and said:  “The transition from a business-as-usual approach to the adoption of evidence-based decision-making must be supported at many levels and by the various institutions that are mandated to support the management of data instrumentation across the region. Only a regional approach to data collection, dissemination and use will aid the region to respond and adapt to the effects of climate change.”

The CCAP acknowledges that a robust and integrated data gathering system can assist the region in collecting more consistent and accurate data that are critical to the decision-making and the development of countries like St. Lucia and the wider Caribbean as a whole.