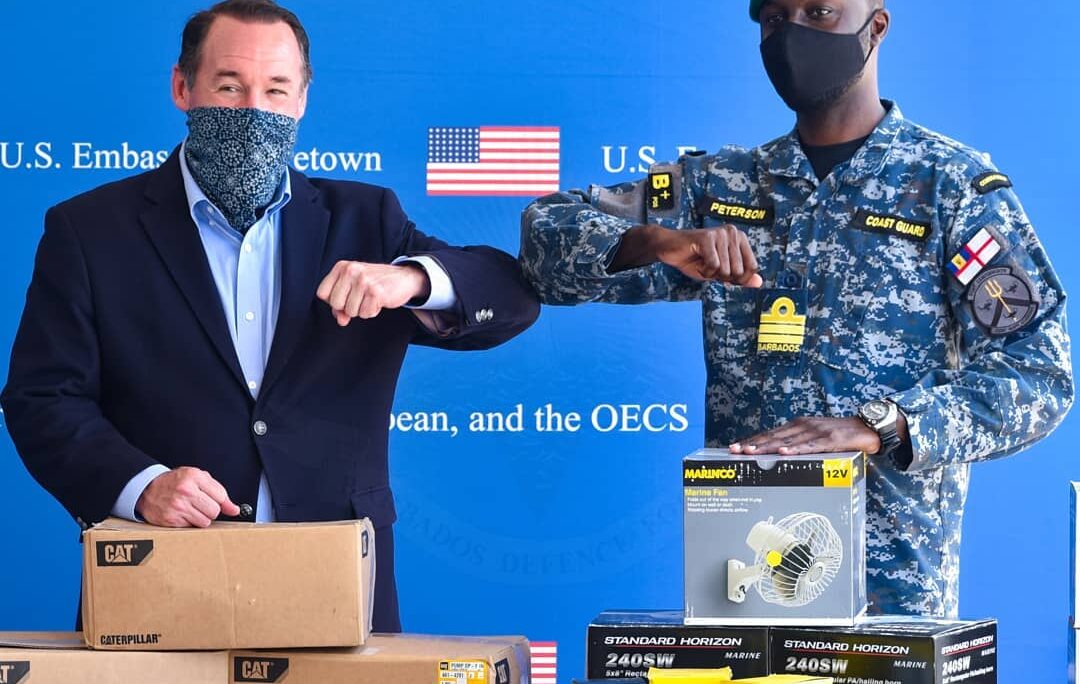 Photo caption: Chargé d'Affaires of the U.S. Embassy in Barbados, Joaquin Monserrate and Commander Mark Peterson pose with some of the donated items.

On Friday, June 4, U.S. Southern Command, donated vital maritime parts to the Barbados Coast Guard at a handover ceremony held at the Barbados Coast Guard Headquarters, HMBS PELICAN. The donation, which is valued at approximately US$195,000, is part of the Caribbean Basin Security Initiative (CBSI) Foreign Military Financing Program and was led by the U.S. Embassy in Bridgetown with support from the U.S. Coast Guard’s Office of International Acquisitions Program. The maritime spare parts package will support multiple vessels previously donated by the U.S. Embassy’s Military Liaison Office and the Bureau of International Narcotics and Law Enforcement Affairs to the Barbados Coast Guard and will assist with future maintenance and operations to ensure capability to conduct maritime patrols, counter illicit-trafficking operations, and maintain border security.

Chargé d’Affaires of the U.S. Embassy in Barbados, Joaquin Monserrate, noted that the handover ceremony reflects the long-standing commitment of the United States to Barbados and the region to support sustained peace and security. He added, “We are proud of the opportunity to continue to partner with the professional men and women of the Barbados Defence Force and Coast Guard.” Speaking on behalf of the Barbados Coast Guard, Commander Mark Peterson, said, “The donation is timely, well-received and will undoubtedly boost the Barbados Coast Guard’s maritime capacity. Barbados, allied with the United States, continue to play a pivotal role in maritime safety and security.”