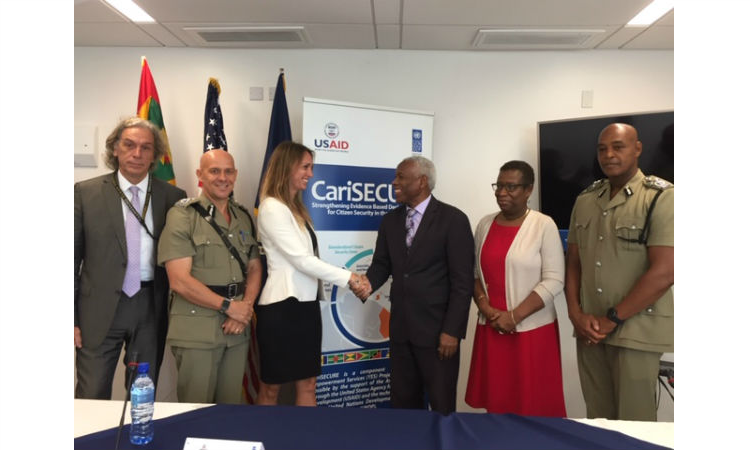 On July 24, the United States Government, in collaboration with the Government of Grenada, launched a Police Records Management Information System (PRMIS) that will help the Grenada Police Force to improve data management and analysis. The PRMIS system, will be piloted in three police stations – St Paul’s, St George’s Central and St George’s South – and will ultimately strengthen police response to support crime reduction through measures such as geo-mapping crime and victim and offender profiling.

The system, a key component of the United States Agency for International Development’s (USAID) CariSECURE project, uses standardized crime and violence data to foster evidence-based policy and programming across nine eastern and southern Caribbean countries, including Grenada. These countries will benefit from customized software that allows for comparisons among countries and generates high quality data to support cohesive regional crime strategies and responses. Grenada is the fourth country in the region to launch the system.

Addressing a ceremony to launch the PRMIS, Acting Mission Director USAID Eastern and Southern Caribbean, Mary Bliss, said, “Criminals are becoming savvier, and their crimes more sophisticated, with the use of new technologies. It is imperative that law enforcement officials also maximize available technology, to optimize their operating efficiency and to stay at least two-steps ahead of criminals”. She further noted and commended the strong leadership and investment by the Grenada Government in this transformational exercise, where in the coming month, Grenada will be the first of the four pilot countries to fully expand the PRMIS to all police stations; a model partner of USAIDs Journey to Self-Reliance strategy.

CariSECURE is a component of USAID’s wider Youth Empowerment Services (YES) Project, and it is implemented in partnership with the United Nations Development program (UNDP).