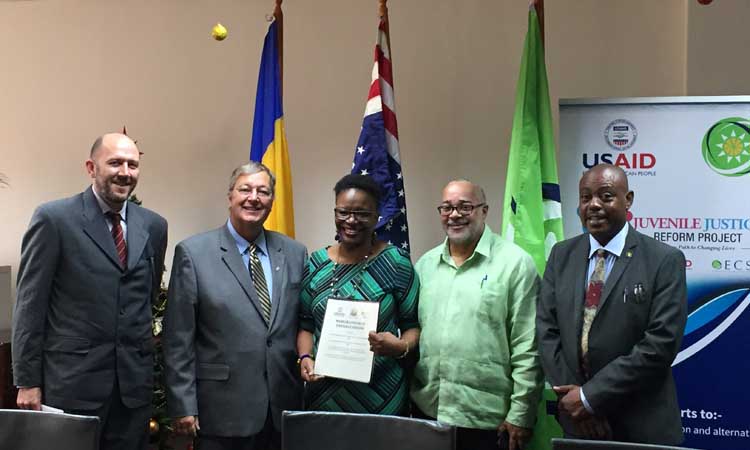 The United States Government, the Government of St. Vincent and the Grenadines and the Organisation of Eastern Caribbean States (OECS) Commission signed a Memorandum of Understanding today signaling their continued commitment to the successful rehabilitation and reintegration of youth in trouble with the law.  The agreement falls under the United States Agency for International Development‘s (USAID) Juvenile Justice Reform Project (JJRP II) implemented in partnership with the Organisation of Eastern Caribbean States (OECS).  Minister of Social Mobilization, Frederick Stephenson, USAID Eastern and Southern Caribbean Mission Director, Christopher Cushing, and Director General of the OECS Commission, Dr. Didacus Jules signed the agreement during a ceremony at the Office of the Prime Minister.

Mr. Cushing underscored that USAID supports home-grown solutions to address the needs of the youth that are most vulnerable. To this end, he encouraged the Government and other partners to re-double their efforts to pass the new Child Justice Bill.  One key aspect of the legislation is the fact that it will allow police, working in collaboration with other juvenile justice service providers, to  steer youth who have not committed violent offences away from the Courts. It will also focus on rehabilitation and a successful reintegration back into their communities. “Globally, practitioners and juvenile justice officials are moving away from harsh and punitive measures that have proven counter-productive and costly, and are instead seeking to implement balanced, restorative approaches that hold young people accountable without compromising their future,” Mr. Cushing explained.

In addressing the ceremony, Minister Stephenson said the signing represented a momentous occasion for St. Vincent and the Grenadines. He highlighted that his country had benefited from over US$2.5 million under Phase 1 of the project for juvenile justice reform and revealed that a new Child Justice Bill was currently before a Parliament Select Committee.

Director General of the Organization of Eastern Caribbean States (OECS), Dr. Didacus Jules, also expressed deep appreciation to the United States Government for its support under this initiative, noting that the project was meant to alter the DNA of the region’s Juvenile Justice Sector.

JJRP II is part of USAID’s wider Youth Empowerment Services (YES) Project to reduce youth involvement in crime and violence and targets the most at risk youth in the six OECS countries.