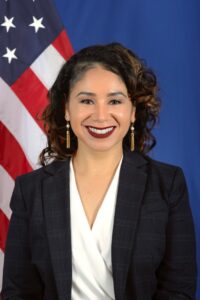 Special Representative Desiree Cormier Smith will deliver the keynote address on “Dynamics of Race, Gender, Equality and Leadership” during the event hosted by the Eastern Caribbean Alliance for Diversity and Equality.  The conference will predominantly draw civil society leaders from across the Caribbean who advocate for the human rights of LGBTQI+ persons, a community that faces violence, discrimination, and exclusion around the world.

Preparing for the visit, Special Representative Cormier Smith remarked: “I’m incredibly honored to be at the 10th Annual Caribbean Women and Sexual Diversity Conference in Barbados alongside those who are working tirelessly to create a more just world where all people are valued and included, and no one is prevented from living up to their full potential because of their race, ethnicity, sexual orientation, gender identity, gender expression and sex characteristics.”

The Special Representative will also meet with Government of Barbados representatives, as well as UN and CARICOM regional offices focused on key areas including economic justice, social inclusion, and understanding the disproportionate impact of climate change on marginalized racial and ethnic communities.

During her visit Special Representative Cormier Smith will focus on her mandate to work toward a world in which no one is prevented from living up to their full potential simply because of their race or ethnicity. She is in Barbados to support women and gender diverse people of color who have gathered from across the Caribbean to advance their human rights.