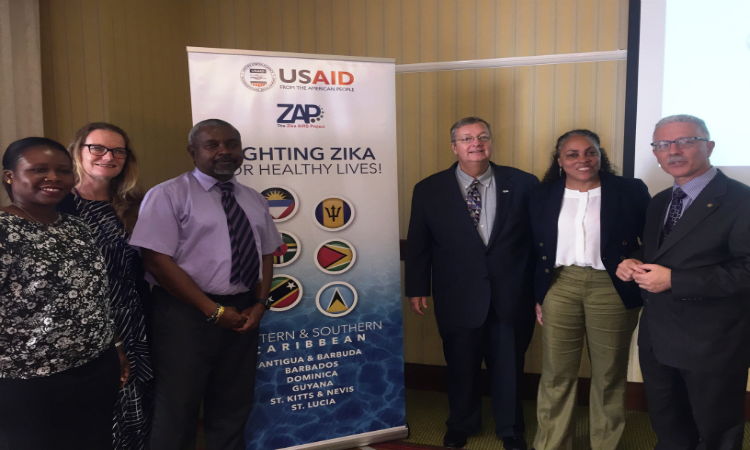 As part of ongoing efforts in the Caribbean region to combat the spread of the Zika virus, the United States Government is supporting the opening of a Barbados-based Regional Headquarters for the Zika AIRS Project (ZAP). The United States Agency for International Development (USAID)-supported initiative focuses on vector control to strengthen the region’s capacity to eliminate mosquito populations, namely the Aedes Aegypti that transmits the Zika virus and other mosquito borne illnesses.

The Project is being implemented in Antigua and Barbuda, Barbados, Dominica, Guyana, St. Kitts and Nevis, and St. Vincent and the Grenadines as part of a larger Zika initiative launched by the U.S. Government in response to the World Health Organization’s declaration of Zika as a public health emergency in 2016.

In addressing a ceremony to officially launch the ZAP Regional Headquarters, USAID Mission Director, Christopher Cushing, told health practitioners that despite best efforts, “Zika continues to pose a serious threat to public health across the Caribbean.” Mr. Cushing noted that “the U.S. Center for Disease Control is still registering cases of Zika infection among American tourists returning from the Caribbean and maintains its warning that pregnant women should not travel to areas with risk of Zika. The Caribbean, including Barbados, is still on this list.”

Mr. Cushing told the audience that mass media campaigns and community-level messaging have fostered wide-spread knowledge on how to prevent infection and protect families from the disease. Under the ZAP, Ministries of Health are receiving technical assistance in vector control activities and in the development of national guidelines for integrated vector control management. Environmental compliance and safety measures for insecticide use are also among the project’s outputs. He said that in Barbados, a key project deliverable will be the procurement and outfitting of an insectary and the training of vector control personnel.

While commending project partners for their commitment and dedication, Mr. Cushing emphasized that the work of the regional project was enhanced through critical partnerships with the Pan American Health Organization (PAHO) and Caribbean Public Health Agency (CARPHA), with these agencies supporting Ministries of Health to adopt regional guidelines for integrated vector management. He stressed that while this Project is primarily focused on Zika, the investments made will help to prevent all mosquito-borne illnesses.