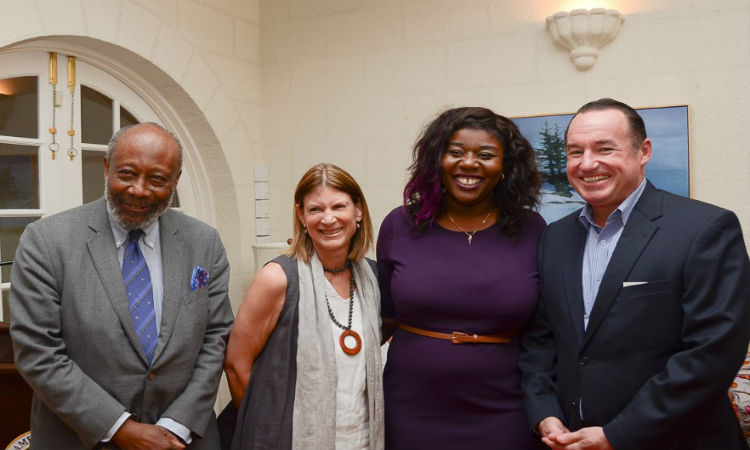 Over 90 Barbadian and American filmmakers, actors, and film enthusiasts mixed and mingled at the lively reception for the Barbados Independent Film Festival (BIFF), hosted by the U.S. Embassy on Monday evening.  The embassy has been an ardent sponsor of BIFF since its creation four years ago, providing funding for filmmaker workshops, technical support, equipment, and hosting a film screening.

In his opening remarks, Deputy Chief of Mission Joaquin Monserrate stressed the important role the local film industry plays in Barbados.  “We’ve been supporting this festival since the start, and we celebrate its creativity tonight”, he announced to the packed audience at the U.S. Ambassador’s residence.  “The arts fuel creativity, innovation, and economic growth for people at all levels of society.  It is my hope that the Barbados Independent Film Festival will spark new opportunities and continue to cultivate informative cultural exchange.”

BIFF co-founder and Director Jennifer Smith also acknowledged the unwavering support from the U.S. Embassy and other sponsors in making the BIFF an annual success.  “Thank you to the U.S. Embassy for always hosting this reception, offering a big screen for one of our film screening, and for facilitating U.S-Barbadian filmmaker trainings throughout the year.  And thank you to the many volunteers, who do their full-time jobs in addition to being full time volunteers.  The BIFF would not be a success without your help.”

The 2020 Barbados Independent Film Festival (BIFF) will feature an exciting line-up of local and international filmmakers and stars.  The six-day Festival, January 14-19, 2020, will showcase thought-provoking films from around the world.  Alongside multiple screening events, BIFF also features masterclasses and film discussions led by industry veterans and filmmakers, broadening its appeal and helping to inspire new generations of filmmakers