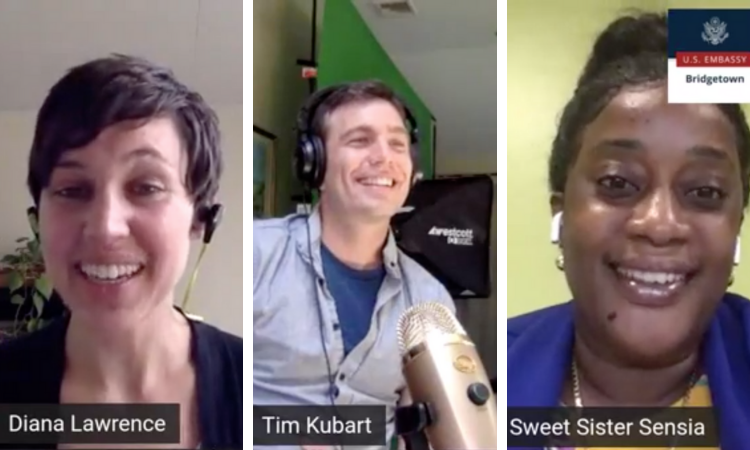 Sweet Sister Sensia immediately focused on ways artists could monetize their work.  Musicians Kubart and Lawrence explained how the role of the American Society of Composers, Authors and Publishers (ASCAP) and Broadcast Music, Inc. (BMI) in the United States was similar to the Copyright Society of Composers, Authors, and Publishers, Inc. (COSCAP) in Barbados and the Eastern Caribbean Collective Organisation for Music Rights (ECCO).  These organizations protect members’ musical copyrights and collect license fees from businesses that use that work.  Kubart told a story about how in his early days as an independent artist – to his surprise – he received a check in the mail to compensate him for his songs being aired on the radio.

Many viewers contributed to the conversation with their own personal experiences and questions.  When asked why the IPR issue was important, Lawrence responded, “Because we’re all trying to create a system in which we can all feel valued for the work that we do.  We’re all part of an ecosystem.  We’re not alone.  We’re artists in community with each other even if we’re across the world like we are right now.  That’s really special, and the way we can have that contribute to our livelihoods is by agreeing as a community to be fair to each other and compensate each other.  It’s part of creating a community that we all want to work in.”  Kubart added, “These conversations can be hard to have, but you should be protecting yourself and crediting other people.”

Viewers shared government and NGO resources to support artists looking to take their first step in protecting their work.  U.S. Embassy Public Affairs Officer Larry Socha acknowledged the present COVID-19 reality saying, “The arts are incredibly important to the economic recovery underway.”  He highlighted that the Barbados Ministry of Creative Economy, Culture, and Sports and the National Cultural Foundation would convene a networking session for creative practitioners at the Wildey Gymnasium on Friday, July 10, from 4:00pm.

Interested readers can view the entire conversation at www.facebook.com/USEmbassyBarbados/videos.