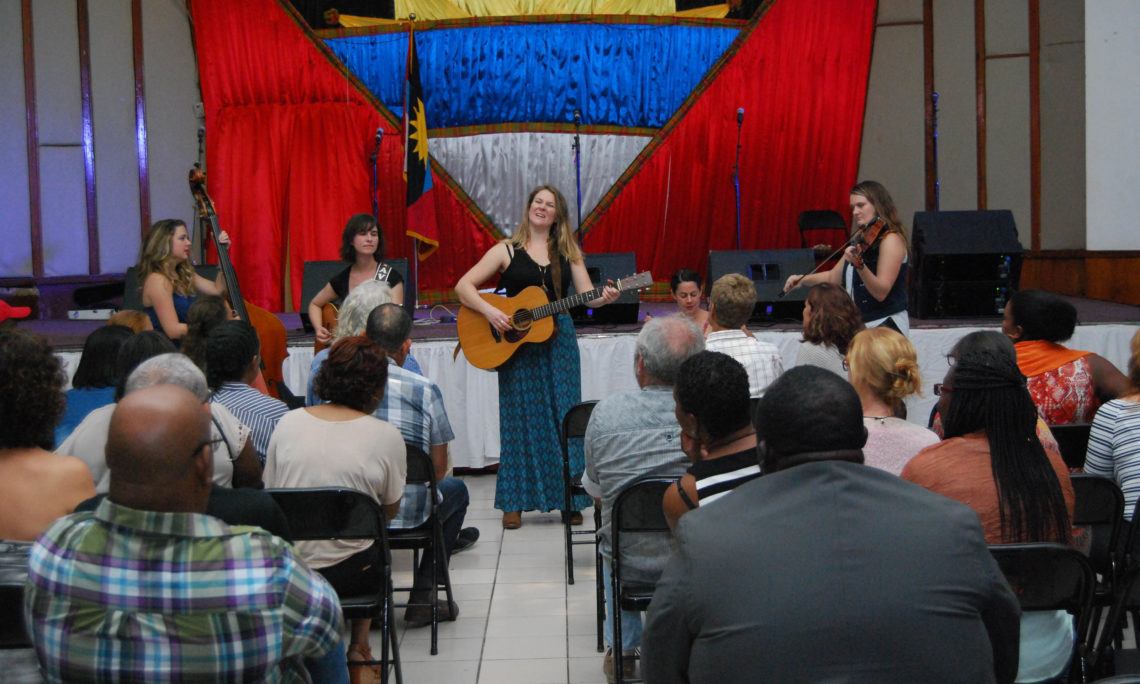 In Antigua, Della Mae performed on December 1-3 for an enthusiastic audience at the Multipurpose Cultural Center in St. John’s, playing a solid one-hour set of their original songs, including “Boston Town” — their most recent release — “To Ohio” and “You’re my Bourbon Hound.”

The Grammy-nominated band was founded in 2009 by fiddle player Kimber Ludiker, who was born in Spokane, Washington. Kimber is a fifth-generation fiddle player, having started playing since the age of 3. For this Eastern Caribbean tour, Kimber was accompanied by Celia Woodsmith, lead vocalist and guitarist; Bonnie Paine, vocalist and washboard player; Avril Smith, guitarist; and Vickie Vaughn, bassist and vocalist.

“The U.S. Embassy is hosting this series of public concerts to underscore the excellence and diversity of American music, and to promote cultural exchange,” said U.S. Embassy Public Affairs Officer James Rodriguez. “This concert series appealed to a wide range of music lovers, specifically country music fans, American bluegrass music fans, young and upcoming musicians, music students, and the general public. We will continue to support the arts in the Eastern Caribbean through dynamic cultural initiatives and programming.”

Although they maintain a busy touring schedule, Della Mae have also found time to serve as cultural ambassadors in the U.S. State Department’s American Music Abroad program.  In that capacity, they’ve undertaken a series of extended trips to Pakistan, Kazakhstan, Kyrgyzstan, Tajikistan, Turkmenistan, Uzbekistan, Brazil, Saudi Arabia, and the United Arab Emirates, playing concerts for local audiences as well as collaborating with local musicians and participating in children’s music-education programs.