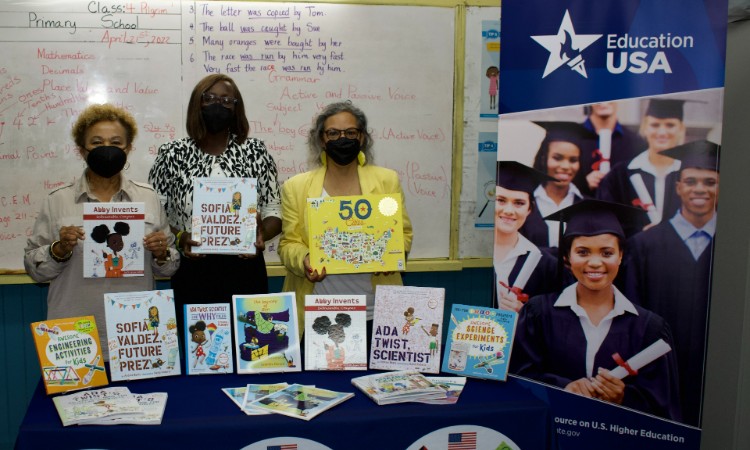 To celebrate World Book and Copyright Day 2022, the U.S. Embassy donated copies of the book The Journey of Bim along with STEM-themed children’s titles to seven primary schools across Barbados.   Participating in one of the donations at the Vauxhall Primary School were U.S. Congressional Representatives Barbara Lee (D-CA) and Robin Kelly (D-IL).  They were joined by U.S. Ambassador to Barbados Linda Taglialatela.  Congresswoman Lee, who was mentored by onetime Vauxhall Primary School student U.S. Representative Shirley Chisolm, enjoyed learning more about the school’s connection to the late Congresswoman.  Shirley Chisholm was first African American woman elected to the U.S. Congress, and 2022 marks the 50th anniversary of her historic campaign for President of the United States.  She attended the Vauxhall Primary School in the late 1920s and early 1930s.

Speaking at the donation ceremony, Ambassador Taglialatela lauded the school’s role in the education of Congresswoman Chisholm, saying, “Inspired by her teachers here at the Vauxhall Primary School, Ms. Chisholm was as an educator before and after serving seven terms in the U.S. Congress.  Barbados and the United States likewise share the common value of educational opportunity for our children as the future leaders of their communities.”