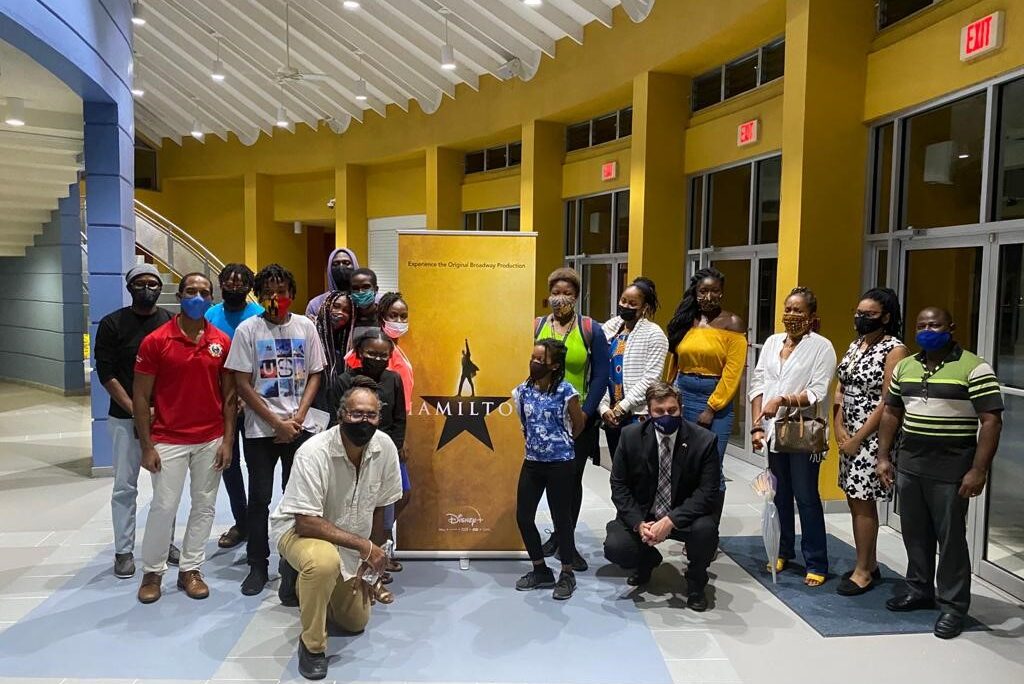 BRIDGETOWN—On Thursday evening, the U.S. Embassy and the University of the West Indies (UWI) Cave Hill Campus screened the popular musical Hamilton for students and faculty in the creative arts. The musical traces the life of U.S. Founding Father Alexander Hamilton: his childhood in the Caribbean, his meteoric rise during the American Revolutionary War, his appointment as the nation’s first Secretary of the Treasury, and his fatal duel with arch nemesis Aaron Burr.

“Hamilton is about values we share in common as Americans and as Barbadians,” U.S. Public Affairs Officer Larry Socha said in his opening remarks. “It’s about freedom, enterprise, and perseverance.”  Dr. David Akombo, Dean of the Faculty of Culture, Creative and Performing Arts at UWI, noted that “our students, staff, and UWI community will greatly benefit from this collaboration in promoting education, culture, and exchange of ideas in the creative industry and cinematography.”

The original New York City Broadway production of Hamilton – a mix of musical styles including hip-hop, jazz, and R&B – opened in 2015 to rave reviews.  Hamilton the film, presented by Disney, transports the audience to the world of the Broadway show in a uniquely intimate way.  The film became available through the subscription streaming service Disney+ in July, and through a special arrangement with the US Department of State and in observance of COVID-19 health protocols, UWI screened it for an invited audience of students and faculty.  Though the heavy rains kept some away, those in attendance were treated to the superior visual and audio quality of the Walcott Warner Theatre.

Following the film, Deputy Dean Andrew Millington and U.S. Deputy Public Affairs Officer Leland Lazarus led a discussion about some of the musical’s themes, such as changing gender norms, the need to balance career ambition and family, and the importance of moral leadership. Audience members were impressed by the acting, technical staging, and cinematography. “I want to watch it again!” said one student.

In addition to Barbados, the U.S. Embassy also hosted small screenings or shared limited-time access links to partners in Antigua and Barbuda, Dominica, Grenada, St. Vincent and the Grenadines, St. Lucia, and St. Kitts and Nevis. This weekend, the Hamilton House in Nevis will screen the film in the birthplace of the incredible, and often overlooked, Founding Father.