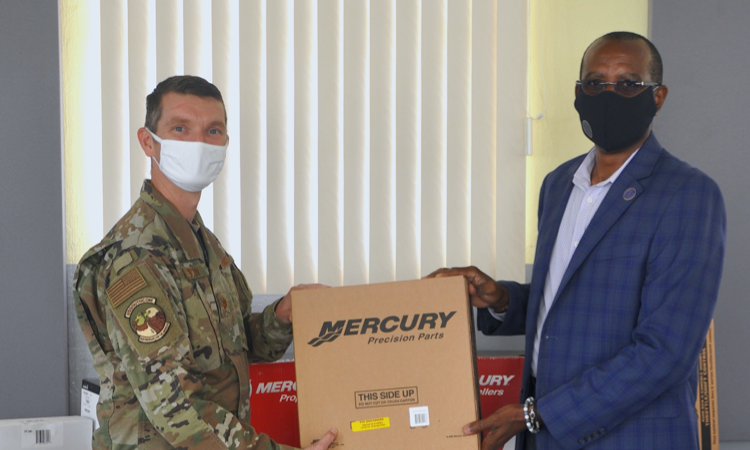 U.S. Air Force Maj. Shane Moran officially handed over nearly $US 40,000 worth of maritime components and parts to Capt. Errington Shurland, the Executive Director of the RSS, during a ceremony at the Regional Security System headquarters at Paragon Base, Barbados on June 8th, 2020.

BRIDGETOWN, Barbados – The United States Embassy recently furnished the Regional Security System with nearly $US40,000 worth of maritime equipment and upgrades, to assist in the maintenance and longevity of the RSS Maritime Training Center’s patrol boats. The patrol boats are used to train police and coast guard forces throughout the Caribbean.

“Our US partners continue to support the maritime training vessels through the supply of spares and other accessories,” said Lieutenant Rolerick Sobers, Regional Maritime Officer for the RSS. “The refurnished fleet of training vessels will enrich the maritime training activities that will support the transfer of knowledge and skill sets that are necessary to have desired, effective and positive outcomes of operational missions. “

Originally donated by the U.S. Government, these vessels have played a key role in developing the collective seafaring capacity of Eastern Caribbean coast guards and police forces. The recent purchase of parts ensures the RSS is able to train and prepare coast guardsmen and police officers well into the current decade.

“This donation is part of the larger U.S. commitment to our assisting our Eastern Caribbean partners to protect their sovereignty and ensure security of their territorial waters”, said Maj. Shane Moran, Deputy Chief for the U.S. Military Liaison Office. “As the region has seen an uptick in illicit activities and trafficking, ensuring that Caribbean maritime security officers are well prepared and well equipped continues to be at the forefront of U.S. Southern Command’s priorities as both a regional ally and neighbor.”

Donated by the U.S. Government in the early-2000s, the patrol boats have been an integral component of the RSS’s maritime training institute, with police officers and coast guardsmen from throughout the Eastern Caribbean training and honing their seafaring skills on the vessels. The collaborative efforts of the RSS and regional partners ensure sailors are equipped with a common set of seafaring skills and a high degree of interoperability between organizations.

“The importance of skilled mariners in the Maritime Law Enforcement units in the RSS maritime security cannot be understated. As maritime crime continues to evolve, so too must the skill set of officers be kept current,” said Sobers. “An active and operational suite of training platforms is a great utility from which to deliver maritime training while ensuring that a common set of core competencies are spread across the carious maritime units.”

In addition to this handover, the United States has provided US$3 million in COVID-19 response assistance to the Eastern Caribbean.  It also supports the U.S.-Caribbean Resilience Partnership, a collaborative effort to build regional capacity to confront disaster response and promote strong communities.