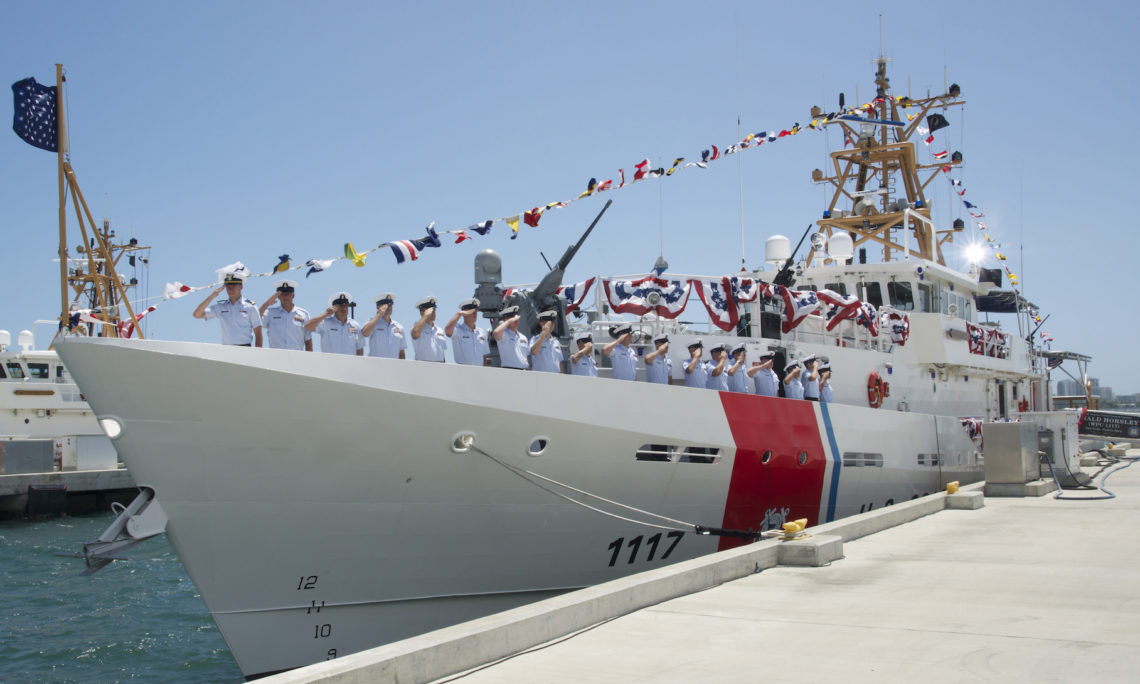 The crew of the U.S. Coast Guard Cutter Donald Horsley salutes as the ship is brought to life during its commissioning at Coast Guard Sector San Juan, Puerto Rico May 20, 2016. The Donald Horsley is the Coast Guard's 17th Sentinel Class fast response cutter and the fifth of its kind to be homeported

The United States Coast Guard (USCG) Cutter Donald Horsley paid a visit to Barbados from May 19-20 to conduct operations in conjunction with the Barbados Coast Guard. The cutter has been conducting interdiction operations against illicit maritime trafficking activities throughout the Eastern Caribbean during the month of May.

The cutter was met in Barbados on May 19 by the Senior Defense Official at the U.S. Embassy to Barbados, the Eastern Caribbean, and the OECS, Commander Christopher Boes, and officials from the government of Barbados.

The ship’s visit represents an ongoing commitment to operations in the Eastern Caribbean by USCG cutters based in San Juan, Puerto Rico, as part of a larger strategy to combat transnational crime networks, secure borders, and safeguard commerce.

Commander Boes said that strategy hinges upon intelligence sharing with partner nations in the region, as well as stepped-up patrols by cutters like the Donald Horsley. “An offshore capability that maintains operational and persistent presence across the high-risk areas of the Eastern Caribbean is an essential component in achieving success in reaching these goals,” Commander Boes said.

The 154-foot-long USCGC Donald Horsley has a maximum sustained speed of 28 knots, making it ideally suited to fast-response interdiction operations. With a stabilized 25mm machine gun mount and four .50-caliber machine guns, the ship is a formidable deterrent to illicit trafficking. The Donald Horsley is one of 17 such fast-response cutters deployed by the U.S. Coast Guard.

Each fast-response cutter is named for a Coast Guard enlisted hero. This vessel is named after Master Chief Petty Officer Donald Horsley, a boatswain’s mate whose career spanned 44 years and three wars.  His combat service in the Vietnam War was distinguished by participation in over 100 combat patrols, earning him the Bronze Star with a Combat “V” for valor.

Before arriving in Barbados, the USCGC Donald Horsley rescued six St. Lucians adrift 25 nautical miles off the coast of Martinique in a 20-foot boot, also emphasizing the search-and-rescue capabilities of the fast-response cutter.