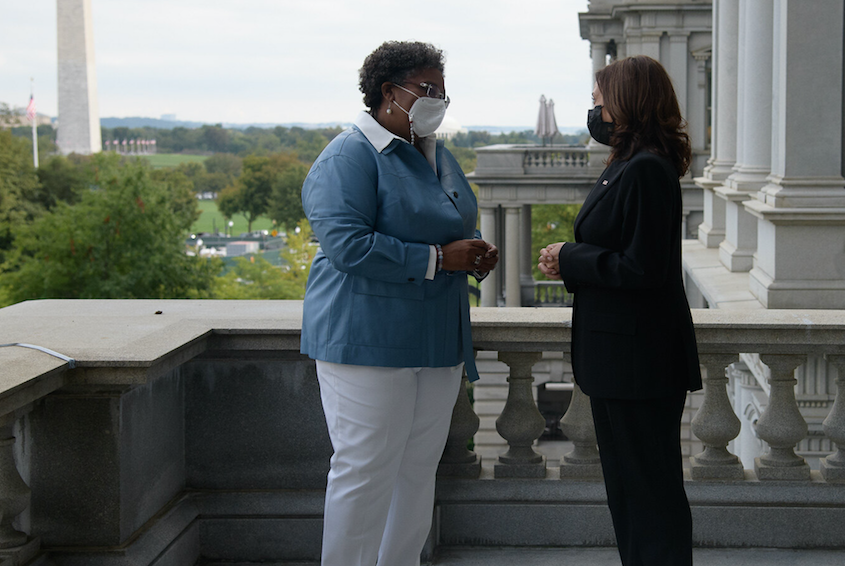 Prime Minister Mottley and U.S. Vice President Harris have a private conversation on the balcony of the Eisenhower Executive Office Building overlooking the Washington Monument and National Mall on October 13, 2021. (Courtesy of the Prime Minister’s Office)

When Neighbors Work Together, the Community Benefits

The United States donated a second tranche of 70,200 Pfizer vaccines last week to the people of Barbados, offering thousands more Barbadians protection against COVID-19.  It pains me to read the reports of lives lost to the virus and concerns me that as infections continue, the virus has more opportunities to mutate.  As with smallpox, measles, and polio in decades past, the fastest way out of this pandemic is through vaccination.  USAID has supported the Ministry of Health with pop-up clinics across the island.  It also announced US$2.5 million in additional regional assistance to fund equipment, information systems, and storage capacity to support the vaccination effort.  The United States will continue to work alongside our partners – PAHO, UNICEF, CARPHA, and CARICOM – to mitigate the effects of COVID-19, and Heaven willing, eliminate the virus all together.

Prime Minister Mottley and Vice President Harris discussed the need to accelerate the COVID-19 economic recovery.  With the rollout of the vaccination effort in the United States, U.S. tourists have accounted for the greatest percentage of holiday visitors to Barbados so far this year.  When air passenger arrivals topped 10,000 in July, Americans accounted for 43.3% of those arrivals, more than the UK and Canada combined.  Beyond these important tourism dollars, the United States remains committed to strengthening bilateral and regional economic ties throughout the Caribbean.  The United National Conference on Trade and Development (UNCTAD), which Barbados hosted last month, confirmed the United States remains the largest investor in small island developing states.  And when President Biden hosted his G-7 counterparts to discuss global infrastructure development last week, he welcomed Prime Minister Mottley as one of only eight other invited participants from around the globe.

When it comes to climate change, the decisions of the world’s biggest economies have outsized effects on the world’s smallest countries.  That’s why President Biden invited Barbados to the G-7 discussion.  We hear Prime Minister Mottley’s call that “national solutions to global problems do not work.”  While President Biden is committed to cutting U.S. greenhouse gas emissions 50-52 percent by 2030 and reaching a 100% carbon pollution-free power sector by 2035, he is likewise committed to working with countries most vulnerable to the impacts of climate change and strengthening their economies to reduce that risk.  But ambition is clearly not enough.  New emission reduction and finance targets are just the first steps in addressing the crisis.

What is clear from the last month, though, is that there is a renewed effort, perhaps helped by the protection offered by vaccines that allows for face-to-face engagement, that Barbados and the United States are committed to addressing these crises together.  Our work together as neighbors and friends benefits the entire Caribbean community.  As President Lyndon Johnson said to Prime Minister Errol Barrow in welcoming him to the White House in 1968, “We are…happier and wiser from even the briefest visit with you.”  I would say to you now, our dear friend and neighbor, that the same holds true more than 50 years later.