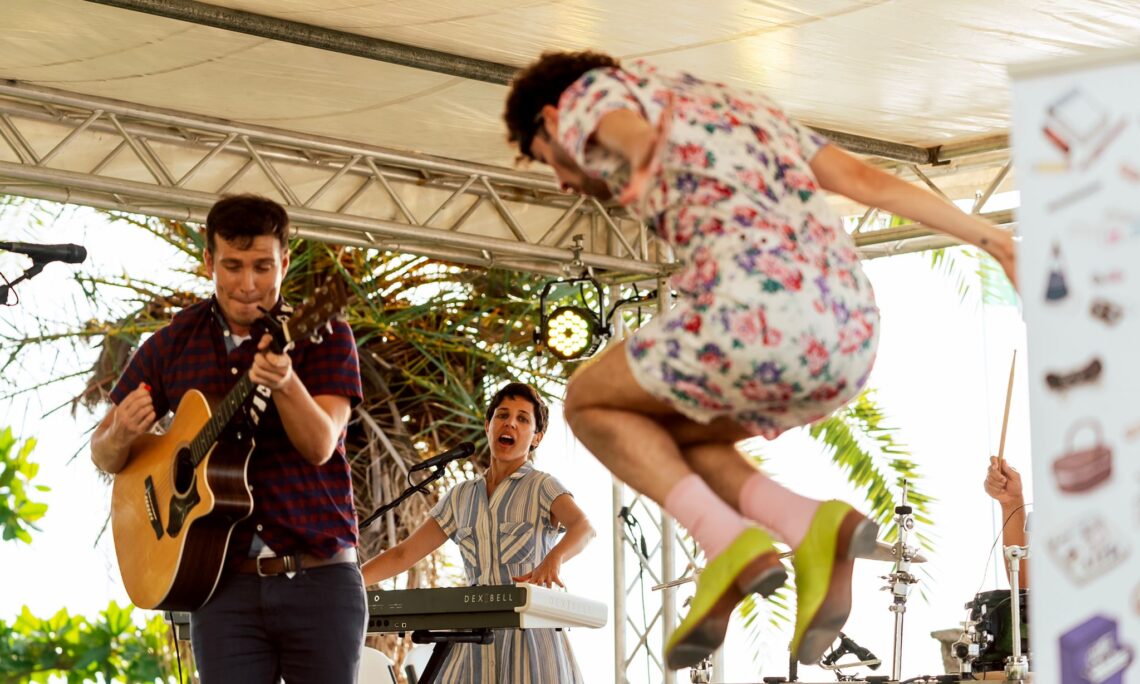 The weekend of December 11 and 12 Grammy award winning musician Tim Kubart and his band, Tim and the Space Cadets, joined the celebration at the Artisan Village Night Market.  New York City based Tim and his band had Nevis on its feet singing and dancing well into the night.  The U.S. Embassy is hosting the award-winning musical group in St. Kitts and Nevis as part of its arts envoy program from December 6-14.  The Ministry of Tourism Nevis and Nevis Historical and Conservation Society welcomed Tim and the band to Nevis for two special performances.

At the Night Market, Kubart said, “When I started making music 18 years ago for children and families, I never thought it would bring me to Nevis.  What an incredible opportunity to meet musicians here and share music together.” Ms. Nyoka Bailey, Product Development Officer in the Ministry of Tourism, welcomed the arrival of Tim and the Space Cadets.  “We’re so happy to have Tim join the Night Market this year.  This is only the second time we’re holding the event, and it’s a treat to have these artists from the United States.  I hope in 2022 we’re able to have even more collaboration between the U.S. Embassy and the Ministry,” she said.

On Sunday, Tim and the Space Cadets performed at the Museum of Nevis History, the birthplace of U.S. founding father, Alexander Hamilton.  Hamilton, who grew up in Nevis and later moved to New York City, had his story popularized by the Broadway musical and remains revered by Americans today. U.S. Public Affairs Officer Larry Socha explained, “It’s pretty special that Tim and the group – most of them from Hamilton’s future home of New York City – get to perform in the place where it all started for Hamilton.  Nevis’ history shaped our own American story, and we’ll never forget that.”  Premier of Nevis and Minister of Foreign Affairs for St. Kitts and Nevis the Honorable Mark Brantley joined the audience of all ages.

Tim and the Space Cadets conclude their program today with an online program: Creatives in COVID – How We Made It Work. The program begins at 12:00 noon  on the U.S. Embassy’s Facebook page: www.facebook.com/USEmbassyBarbados.