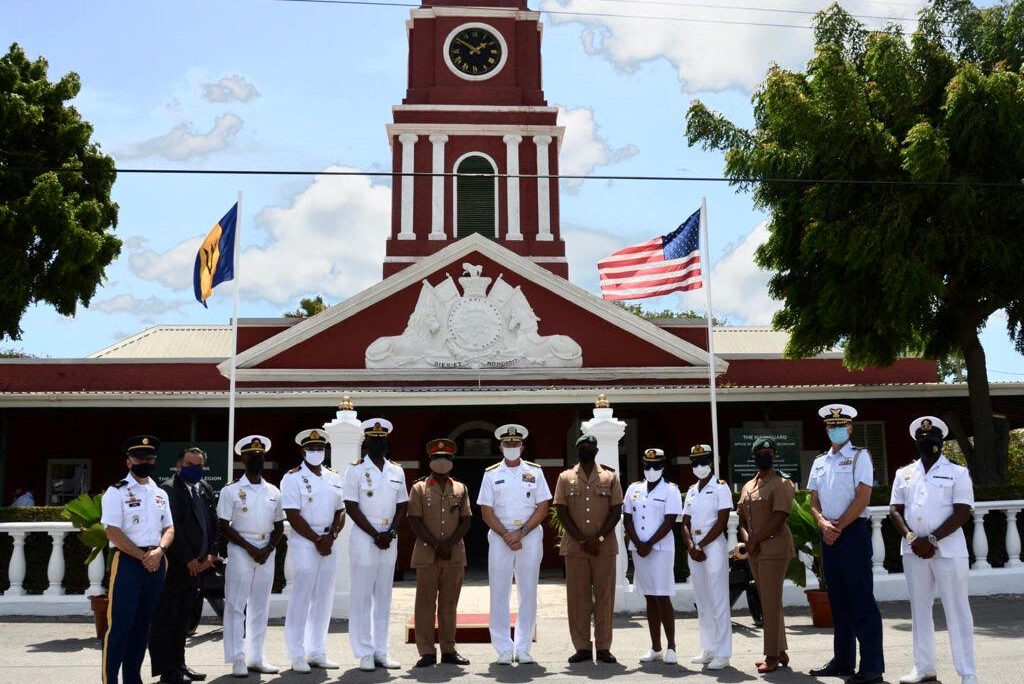 U.S. Navy Admiral Craig S. Faller, commander of U.S. Southern Command (SOUTHCOM), wrapped up his four-day visit to Barbados meeting with acting Prime Minister Santia Bradshaw and members of Barbados’ National Security Council, including Minister of Foreign Affairs and Foreign Trade Dr. Jerome Walcott, Minister of Health and Wellness Lt. Col. Jeffrey Bostic, Minister of Home Affairs Wilfred Abrahams, and the Chief of Staff of the of the Barbados Defence Force (BDF) Colonel Glyne Grannum.  Admiral Faller was later hosted by the BDF at St. Ann’s Fort and the historic Main Guard House on the Garrison Savannah, where he met with graduates of U.S. International Military Education and Training programs.

“It is an honor to be here in Barbados and it is an important and vital security partner to the United States and to the U.S. Southern Command,” Admiral Faller said following his meeting at the Ministry of Foreign Affairs and Foreign Trade.  “I’ve had a number of important interactions with Col. Grannum, and I value the professionalism of the BDF.  They know their training and skill, and they’ve responded and proven to be incredible partners.  We’re working with our team in the U.S. Embassy to strengthen the relationship.”

Admiral Faller discussed with the Ministers the threats faced by Barbados and the United States, including climate change, the COVID-19 pandemic, and transnational criminal organizations.  “These affect every citizen in the world, particularly here in the Caribbean and the United States of America – such close and important neighbors.”  He highlighted how Barbados had been the first recipient of a field medical facility, through a $1.7 million investment by SOUTHCOM, which now served as the model for other facilities donated to countries throughout the region.

Admiral Faller also underscored on his visit the need for regional cooperation and met with Lt. Col. Michael Jones, Executive Director of the Caribbean Community Implementation Agency for Crime and Security and leaders from the Regional Security System (RSS).  He hosted a security roundtable with security chiefs from across the Eastern Caribbean and paid a visit to the headquarters of the Caribbean Disaster Emergency Management Agency (CDEMA) where he met with Executive Director Elizabeth Riley.

“We have a fine foundation and a good history together.  Relationships only go one of two directions, and we’re planning to make this stronger,” said Admiral Faller.