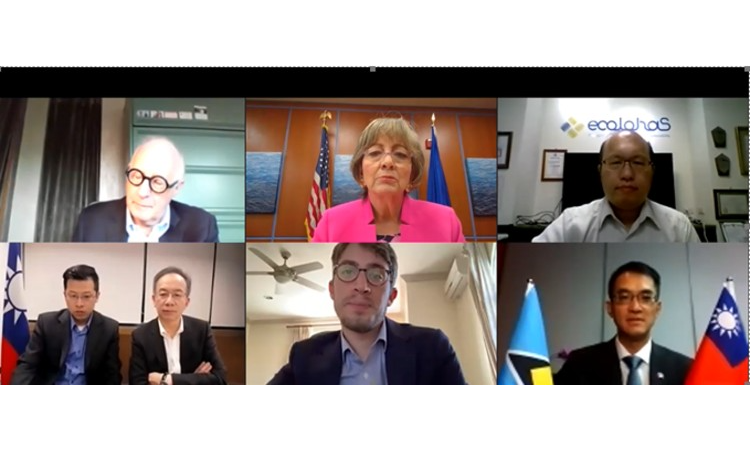 “Saint Lucia is one of our closest partners in the Eastern Caribbean, and Taiwan is a close global friend of ours,” said Ambassador Taglialatela. “I’m happy that we are working together to strengthen those partnerships… that will contribute to Saint Lucia’s economic revival while building business opportunities for U.S. and Taiwan companies.” Taiwan Ambassador Chen pointed out that the POD marked “a new chapter in Taiwan-Saint Lucia-U.S. trade and investment partnership.”

Minister Felix praised this timely initiative that will help Saint Lucia attract foreign direct investment amidst the negative economic impact of COVID-19. “The people of Saint Lucia remain both resilient and resolute in our efforts in developing a robust and diverse economy,” he declared. He hoped that U.S. and Taiwan businesses would see that Saint Lucia’s geographically strategic location, robust infrastructure, and political stability make it an attractive place for investment.

The second virtual program, hosted by Saint Lucian entrepreneurship organization SLUDTERA, featured a lively discussion by U.S., Taiwan, and Saint Lucian representatives on pragmatic ways to support the business start-up ecosystem in the region. SLUDTERA founder Michelle Samuel moderated the program with co-founder Lisa Yarde. In 2017, Ms. Samuel participated in the Young Leaders of the Americas Initiative, the U.S. government’s flagship entrepreneurship program in Latin America and the Caribbean.  Ambassador Taglialatela hailed Ms. Samuel as “the perfect example of a successful YLAI alumna,” who started SLUDTERA shortly after her return and has supported dozens of entrepreneurs on the island.

The panelists who joined the discussion included U.S. Deputy Public Affairs Officer Leland Lazarus, representative of the Taiwan-based Asia Silicon Valley Development Agency Paul Lee, representative of the U.S-based Global Entrepreneurship Network Susan Amat, and Invest Saint Lucia Project Coordinator Dave Headley. By the end of the day, over 1,000 people viewed the virtual entrepreneurship workshop on Facebook from across the Caribbean. The full video can be viewed at the following link: https://fb.watch/1zW4Yel21l