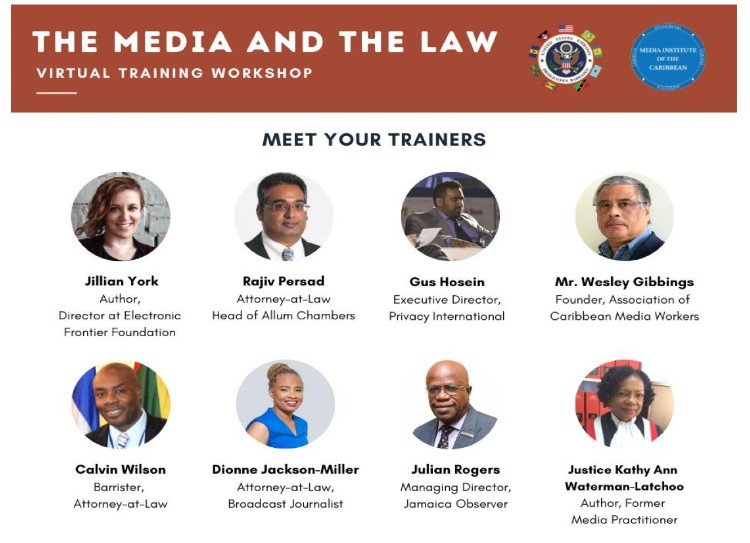 More than 140 media professionals, academics, and communication students participated in a virtual workshop on “Media and the Law” hosted by the Media Institute of the Caribbean (MIC), with support from the U.S. Embassy to Barbados, the Eastern Caribbean, and Organisation of Eastern Caribbean States (OECS) between July 20 and August 3, 2021.

Over a period of three weeks, participants from Antigua and Barbuda, Barbados, Dominica, Grenada, Guyana, Jamaica, St. Kitts and Nevis, Saint Lucia, St. Vincent and the Grenadines, and Trinidad and Tobago participated in lecture sessions and discussions on a variety of issues related to Caribbean legislation, jurisprudence, and legal practice.  Among the areas covered were Defamation, Privacy, Caribbean Security, Parliamentary and Courtroom Reporting, Legislative Issues in the Digital Space, and Freedom of Information Laws. Presenters were drawn from a variety of regional and international agencies and institutions.

According to MIC President Kiran Maharaj, “The fact that we had over 90 media professionals in addition to over 50 students and attorneys, shows the need and interest in the subject matter. Several key areas came up and it is clear that the Caribbean legislative agenda needs to be examined with regards to matters related to press freedom and the right of the public to know. The media has a responsibility and in the current climate, there are several obstacles and grey areas which need to be urgently addressed. If we don’t review these issues then there can be severe challenges and threats to press freedom. Now is the right time to collaborate with stakeholders within a Caribbean context.”

U.S. Embassy Public Affairs Officer Laurence Socha expressed gratitude and reiterated the Embassy’s support of initiatives such as this stating, “Many journalists and media workers put themselves at considerable risk to educate and inform the public, even right here in the Caribbean.  Our work with the Media Institute of the Caribbean seeks to ensure that one of the bedrocks of democracy – a free press – is protected by law and shielded from abuses of power to silence or intimidate.”

The MIC will continue its mandate of training in development of media professional throughout the region with forthcoming online sessions and invites participation by registering on its website www.mediainstituteofthecaribbean.com.