The United States is partnering with Caribbean countries in an initiative to build permanent, regional capacity in the area of renewable energies. The initiative focuses on acquiring and modeling Caribbean-specific data for use in planning and policy decisions for the development of a comprehensive renewable energy sector. The United States is also partnering American higher education institutions with the University of the West Indies to enhance research, expand higher education programs, and promote outreach to policy-makers across the region.

The United States contributes more than US$30 million per year to the region for activities such as: 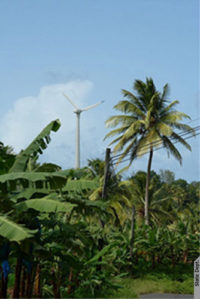 Wind turbines in Dominica are just one example of how renewable energies can replace fossil fuels as a source of electrical power generation in the Eastern Caribbean. With the support of the United States under the Energy and Climate Partnership of the Americas, many such turbines will be constructed.