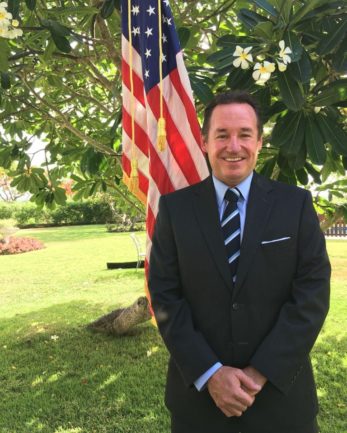 Joaquin F. Monserrate is a Foreign Service Officer with the United States Department of State.   He is currently the Deputy Chief of Mission at the U.S. Embassy for Barbados and the Eastern Caribbean.  Previously, he served as Minister Counselor for Political Affairs of the U.S. Embassy in Mexico City, Mexico (2015-18).   A native of Puerto Rico, Joaquin joined the Foreign Service in 1999 and has previously served at the U.S. Consulate General in Surabaya, Indonesia, where he served his first tour (2000-02) and was most recently its Principal Officer (2012-15).  He has also served as the Political and Economic Counselor at the U.S. Interests Section in Havana, Cuba (2009-12); Deputy Chief of the Economic Section of the U.S. Embassy in Hanoi, Vietnam (2007-09), as well as in India and in the State Department.   Joaquin is a lawyer, and prior to joining State, he practiced criminal and civil litigation, and worked as a print reporter in San Juan, Puerto Rico. He has a B.A. from Georgetown University and a J.D from the University of Puerto Rico.  Joaquin is married to Michaela Newnham, whom he met while on third year abroad studies in England.