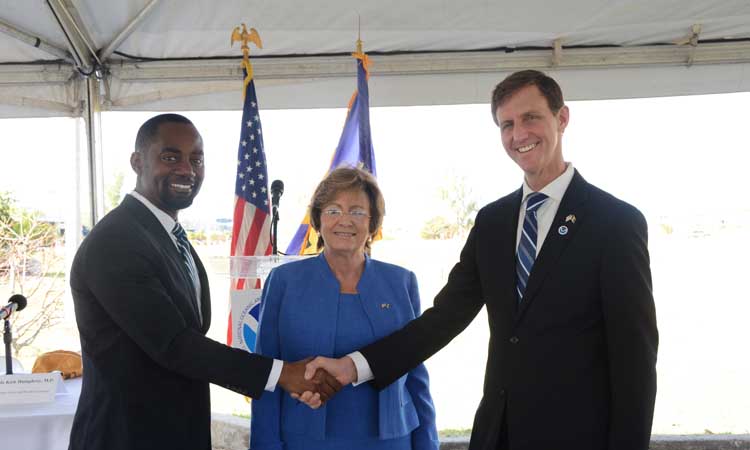 “Today’s ceremony celebrates our longstanding cooperation with Barbados and the Caribbean”, said Ambassador Taglialatela. “It helps us prepare for hurricane season, understand drought, and other climate and atmospheric phenomena that directly impact our safety, security, and prosperity.”

The goal of ATOMIC is to investigate how the ocean and atmosphere work together to create the weather and climate of the region. This research helps Caribbean countries better prepare for natural disasters, potentially saving hundreds of thousands of lives each hurricane season. During January and February, this NOAA-led effort will deploy scientific instruments from the NOAA Ship Ronald H. Brown, research aircraft, and unmanned aerial vehicles to gather observations that will improve weather and climate prediction to support weather-ready and climate-smart countries.

In his remarks, Deputy NOAA Administrator Gallaudet stressed the importance of this research to Barbadian citizens. “We’re going to be using our hurricane hunter capabilities that this science will produce to improve our predictive capabilities, and therefore save lives.”

Minister Kirk Humphrey highlighted the positive collaboration between U.S. and Caribbean scientists on climate research. “We are very happy for this research that is being undertaken by NOAA and CIMH, and we believe that this collaboration will be very transformative”, he said. “I want to thank you for choosing Barbados to be your partner. United States, you’ve always been a very good ally to Barbados.”

The ATOMIC project is a part of the broader EUREC4A field campaign in the Caribbean, which is a scientific collaboration between the United States, Germany, the United Kingdom, and France.

Such projects also strengthen the U.S.-Caribbean Resilience Partnership, a collaborate effort to build regional capacity to confront disaster response and promote resilience.  In 2019, the United States announced $9.5 million for disaster resilience funding in the Caribbean.