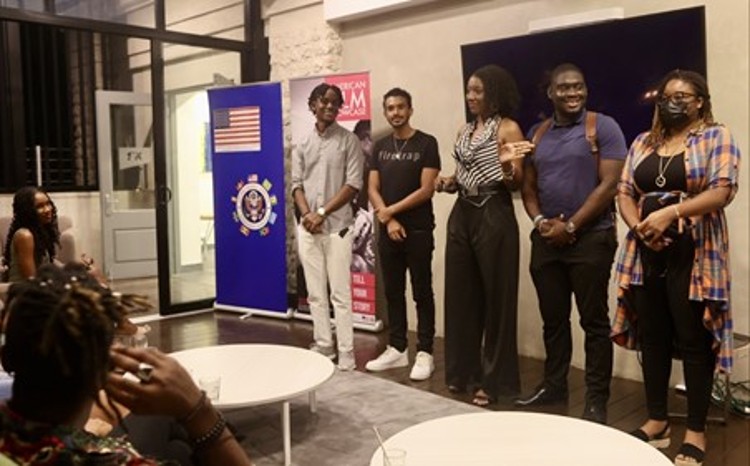 The creative team of Roots of Eden discusses their documentary.

Ten Barbadian filmmakers completed a five-day documentary film workshop at the 1ofK Penthouse on the Limegrove Rooftop Saturday, April 23 with the screening of two documentary shorts.  With support from Barbados Tourism Marketing Inc. (BTMI) and TEN Habitat, U.S. filmmakers Cole Sax and Mack Woodruff led the American Film Showcase (AFS) workshop.  They collaborated with professional, amateur, and student filmmakers to create documentaries entitled Roots of Eden and They Thought I Was Mad.  The films told the respective stories of Regis ‘I-Roots’ Hippolyte and Paul Bourne. Timed with the celebration of Earth Day, the workshop and films shared messages of environmental protection and sustainable farming.

Ahead of the screening of her team’s documentary, Roots of Eden Director Belle Holder explained, “The opportunity to share someone’s personal story can never be taken for granted, and it was an absolute honor to work with Mr. Regis ‘I-Roots’ Hippolyte.”  The film shared I-Roots’ Rastafarian perspective on climate change and environmental protection with an audience of 60 filmmakers, artists, UWI faculty, and friends.  Carseen Greenidge, who worked with his team to share Paul Bourne’s story of creating PEG Farm & Nature Reserve, described his participation in the workshop as an “amazing learning experience.”  He explained, “The practical exposure of the workshop allowed me and my teammates to get a better understanding and appreciation for the process of creating a documentary film as guided by Cole Sax and Mack Woodruff.”  He continued, “The Barbados culture is unique.  There are many opportunities to create films focused on our culture, whether Crop Over, our ancestral history, our way of life, our challenges as a small island developing state, or impacts of climate change.  Cole and Mack brought to bear their own personal and professional experience to Barbados, and I was able to examine my own creative style from a new perspective.”

The workshop, sponsored by the U.S. Embassy, kicked off Tuesday night with the screening of World Debut, directed by AFS Envoy Cole Sax, at the Fairmont Royal Pavilion.  The two five-person teams spent the next four days planning, filming, and editing their documentary shorts for the Saturday showcase.  The U.S. Embassy provided a total of more than US$20,000 in equipment for the participating filmmakers to use on future projects.  The in-person workshop followed a series of virtual engagements through AFS, a partnership between the U.S. Department of State and the University of Southern California School of Cinematic Arts.  Previous AFS workshops focused on themes including pitching for funding, documentary distribution, and the U.S. television industry.