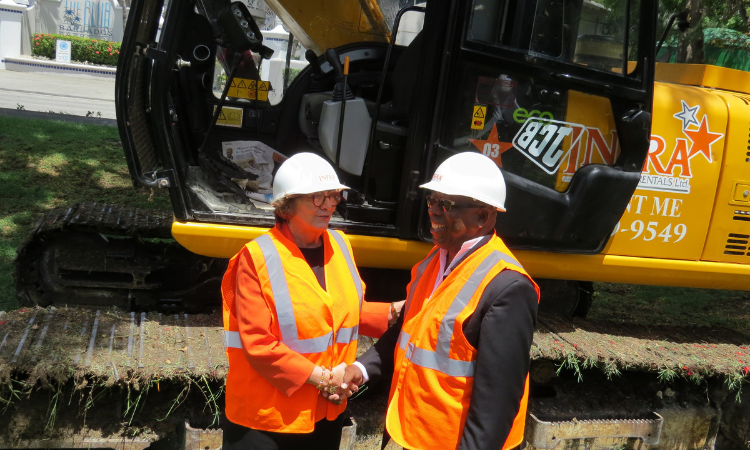 On July 15, the Barbados Ministry of Environment and National Beautification in cooperation with the United States Government broke ground on infrastructure repair work to address flood management and drainage control in the Holetown / Trents area. The ground breaking, represents the start of phase two of the United States Agency for International Development (USAID)’s Water Resources Management and Flood Resilience Project.  It includes upgrading culverts and construction of new drainage channels to manage storm water flow and reduce flooding of homes and businesses, and other drainage issues during severe weather.

In a groundbreaking ceremony attended by Environment Minister Trevor Prescod and other Government officials, United States Ambassador to Barbados, the Eastern Caribbean and the OECS, Linda Taglialatela said the project represents the culmination of several years of cooperation between USAID and the Ministry.  It highlights the USG’s commitment to help Barbados to adapt to the serious impacts of climate variability. “As we all know, the Caribbean is one of the most vulnerable regions in the world to storms and hurricanes.  A combination of increased air and sea temperatures, more intense and frequent storms, changes in rainfall patterns, and rising sea levels, threaten key economic sectors including tourism, agriculture, fishing, and transportation,” Ambassador Taglialatela said.

The Project, which began in 2013, also includes a comprehensive environmental assessment to understand the impact of the project on the environment and recommend ways to prevent possible negative effects. To this end, taking into account impact of the project to the Folkstone Marine Park, a Memorandum of Understanding is to be signed with the Government of Barbados, to establish a long term program for regular maintenance to ensure regular monitoring of sedimentation flow and water quality.

The US Government contributed $5.3 million to the project, while the Government of Barbados invested over $1.7 million in this initiative.