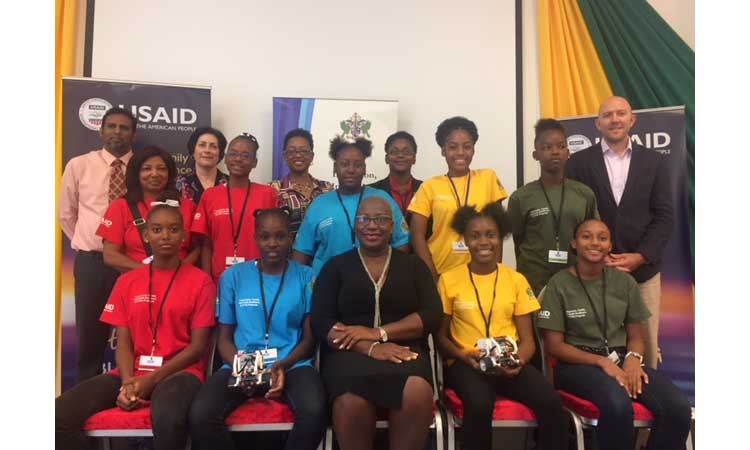 St. Lucian students from four schools participated in a two-day hackathon event to showcase their new skills as part of a United States Government-supported Robotics and Coding pilot program. The program relates to a branch of engineering and science that allows students to design and use robots through computer programming.

The Robotics and Coding initiative is implemented by the United States Agency for International Development’s (USAID) Community, Family and Youth Resilience Project in collaboration with St. Lucia’s Ministry of Education. During the Hackathon, held under the theme “Code4Fun-Programming the Future”, students competed for individual and team prizes much to the delight of parents, teachers, and peers who supported them.

Mr. Kipp Sutton, General Development Office Director, USAID Eastern and Southern Caribbean and the Minister of Education, Dr. Gale Rigobert, lauded the initiative during the official ceremony to launch the Hackathon. Mr. Sutton told the audience that the U.S. Government was honored to partner with the Ministry of Education to support the exciting initiative that promotes science, technology, engineering and mathematics, or “STEM”, as it is more widely known.

“The skills that students develop through STEM programs are skills that will help young people not only understand the world, but also equip them to change it,” Mr. Sutton said. He told participants, “It is important that you have the support and resources you need to explore, experiment, and innovate. It is also important that you make the most of this tremendous opportunity to become future scientists and leaders in the Caribbean and beyond.”

Since March of this year, 280 secondary school students from Beanefield Comprehensive in Vieux Fort; Bocage in Castries; Grande Riviere Secondary in Dennery; and Soufriere Comprehensive in Soufriere, have learned to build, customize, and program robots using computer equipment and Lego Mindstorm kits provided under the pilot project. A total of 12 teachers and five mentors were also trained to deliver the customized curriculum with plans for its eventual integration into St. Lucia’s secondary school curriculum.