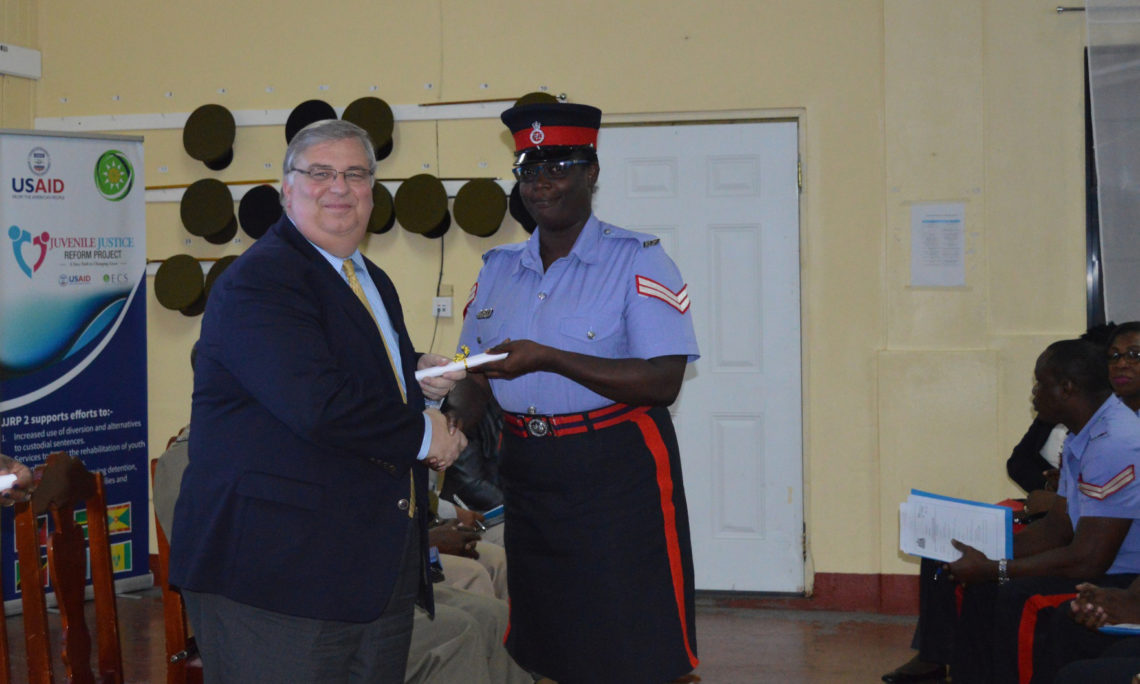 As a result of a series of three-day training workshops, Police, Prison, and Probation Officers in Grenada are better able to support restorative and rehabilitative approaches to juvenile justice reform and understand their unique responsibilities in providing service to children and their families. The workshops were hosted by the United States Agency for International Development’s (USAID) Juvenile Justice Reform Project (JJRP), in collaboration with the Organisation of Eastern Caribbean States (OECS).

The training, which was held on November 30, which targeted more than 100 security officers and staff from the Bacolet Rehabilitation and Treatment Center, focused on standards of care in custody, aftercare and social reintegration of child offenders, management of juvenile facilities, conditions of detention in police custody, girls in detention, and restorative justice.

Addressing the final workshop’s closing ceremony, Stephen Frahm, Principal Officer with the United States Embassy in Grenada, said that the United States Government and the Government of Grenada are striving for a system that addresses trauma and risk factors faced by youth and places less emphasis on traditional punitive measures.

“We recognize that the changes required are often difficult, some will happen more slowly, but they must happen if we hope to reduce the number of children that return to the system, reoffend, and commit serious crimes over time… After reviewing the impact of traditional approaches to justice, the evidence suggests that a rehabilitation-focused approach will better repair the damage suffered by both victim and perpetrator,” he maintained.

Also addressing the ceremony, were the Honorable Delma Thomas, Minister for Social Development and Housing; Magistrate Gloria Augustus of the JJRP Project Unit; and representatives from the Bacolet Rehabilitation and Treatment Centre, and the Police and Prison Service.

The JJRP is partnership between the United States Government, through USAID, and the OECS Commission. It supports six OECS member states to increase diversion approaches, strengthen rehabilitation services, and improve the reintegration processes for children who come into conflict with the law.