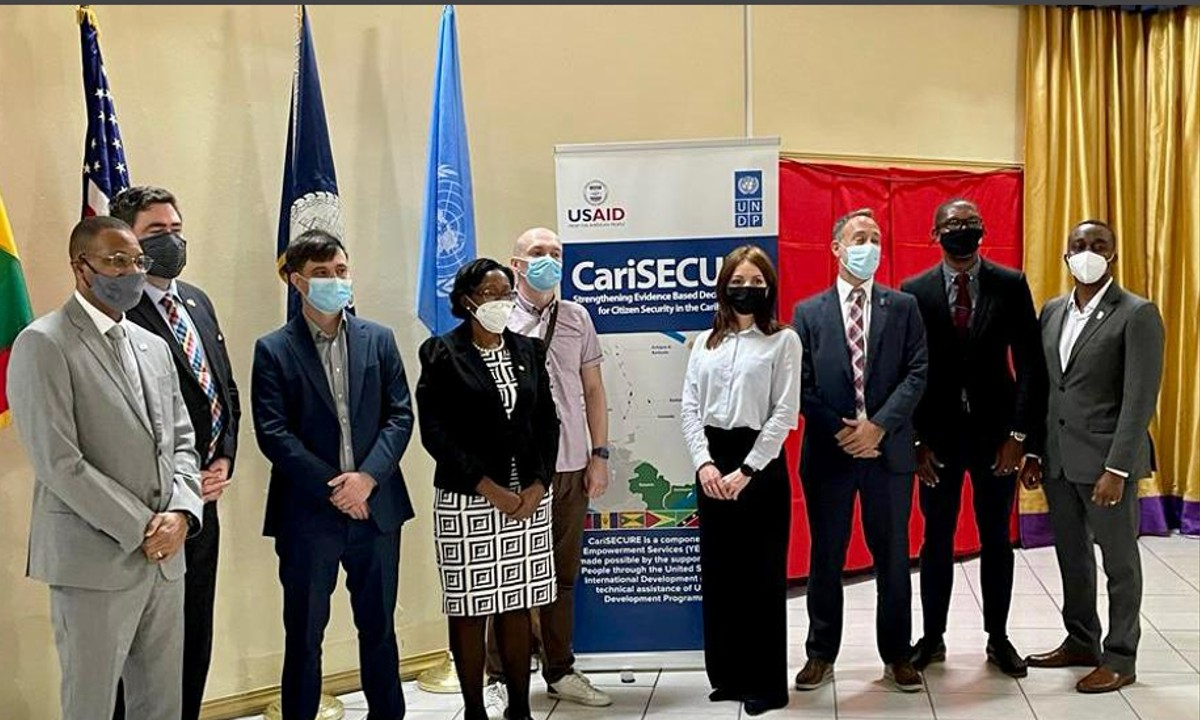 The United States Agency for International Development (USAID) in collaboration with the United Nations Development Programme (UNDP), and the Royal Grenada Police Force (RGPF) launched an automated Police Records Management Information System (PRMIS), February 24, 2022.  The PRMIS will transition police stations from paper-based reporting to a digital format which will assist the Police Force in improving  citizen security data management, analysis, and monitoring for crime.  The launch, held at the Grenada Trade Center, Morne Rouge Grand Anse, St Georges, marked the official handover of almost US$50,000 in computer hardware, including workstations, monitors,  printers, and software to the RGPF to support the implementation of key activities under USAID’s CariSECURE Project.

The CariSECURE Project was designed to improve policy-making and program development on youth crime and violence in the Eastern and Southern Caribbean through the use of quality, comparable and reliable national citizen security data.  Grenada is the first of seven beneficiary countries to launch the system.  PRMIS is being piloted at three police stations – South St. George Police Station, St. David’s Police Station and Sauteur’s Police Station.  The project is also handing over equipment which will allow the digital platform to be rolled out to every police station on the island.  The newly-launched police report application will allow officers from pilot stations to capture real-time data on incidents reported – a stepping stone to more standardized, accurate crime data, which in turn allows for greater evidence-based decision-making to reduce crime and violence.  Through the platform, officers will also be able to identify and map crime hot spots, as well as share information on ‘persons of interest,’ including their traits and crime footprint.

In addition to providing greater information, citizens can expect improved efficiency as the system eliminates the need for multiple crime incident reports.  The use of PRMIS will prompt officers to collect more detailed accounts from victims and witnesses to support investigators with closing cases quickly and efficiently.  Additionally, the application will greatly support the RGPF’s crime analysis unit for which the Project has provided training and equipment for officers assigned.  It is also envisioned that PRMIS will support the sharing of crime data internally and eventually to other agencies in the justice system opening communication channels – this inter-agency collaboration will boost capacities and improve the RGPF’s ability to resolve and prevent incidences of crime.

In preparation for the roll out, refresher workshops were hosted prior to the launch and officers from the pilot stations and other critical RGPF benefited from hands-on familiarization with the new application.  Following the pilot, the intent is for the Government of Grenada to expand the PRMIS in the near future across all police stations.  Once Grenada is fully using the digital system, better targeting of hot-spots and complete country profiles can be rapidly created to inform police responses.  This information can also be shared across the region to address trans-national crime and allow for  sharing of best practices.

Speaking at the launch, Grenada Police Commissioner Edvin Martin noted, “Today is indeed a historic moment for the RGPF as we continue our quest to modernize our police force and align it with 21st century law enforcement practices; a significant part of this effort is embracing technology.  We are now adding PRMIS through CariSECURE, another layer in moving us one step closer to the complete integration of the criminal justice system, with a view to manage crime more effectively through evidence-based policing strategies.”  He also offered thanks to partners noting, “I want to place on record my gratitude to the Government of the United States, USAID and UNDP for the invaluable support and assistance in guiding us through this process to date.”USAID’s Regional Representative, Clinton White, who spoke at the event noted that data is an invaluable and instrumental tool in crime fighting, especially when it is at the fingertips of police officers and other key stakeholders working in crime prevention and response. He said, “USAID has invested almost US$10 million with the goal to strengthen evidence-based decision making for citizen security in the Caribbean.  PRMIS will give police officers 21st century tools to tackle 21st century problems and will transform the way police do business on a daily basis by providing access to real-time, disaggregated crime data that enhances intelligence gathering.”

Ugo Blanco, Deputy Resident Representative UNDP Barbados and the Eastern Caribbean, stated, “This project is part of our commitment to the people of Grenada and the Caribbean to support their resilience in an ever-changing environment.  Through USAID’s and UNDP’s commitment, the CariSECURE project is arming governments with a digital tool to not only improve the resolution of crimes, but to inform policy and youth interventions that can help at-risk youth choose a different path.”

Ms. Merina Jessamy, Permanent Secretary, Ministry of Public Security and Home Affairs in Grenada in her remarks thanked USAID and UNDP for the support provided along the journey.  Noting the importance of continuity she highlighted the number of trained officers who are ready to use the technology to improve policing in Grenada.  Ms. Jessamy, further noted “There is no success without succession planning…with 104 officers trained, 13 officers trained as trainers and all the police stations [equipped] where we will roll out, I do believe that I can say we will have success in all our endeavors.”

CariSECURE, a component of USAID Eastern and Southern Caribbean’s Youth Empowerment Services (YES) Project, aims to build the region’s capacity to effectively address youth crime and violence, through the use of reliable national citizen security information. It represents a partnership between USAID and the United Nations Development Program (UNDP), made possible by the support of the American People. The project is being implemented in nine Caribbean countries.