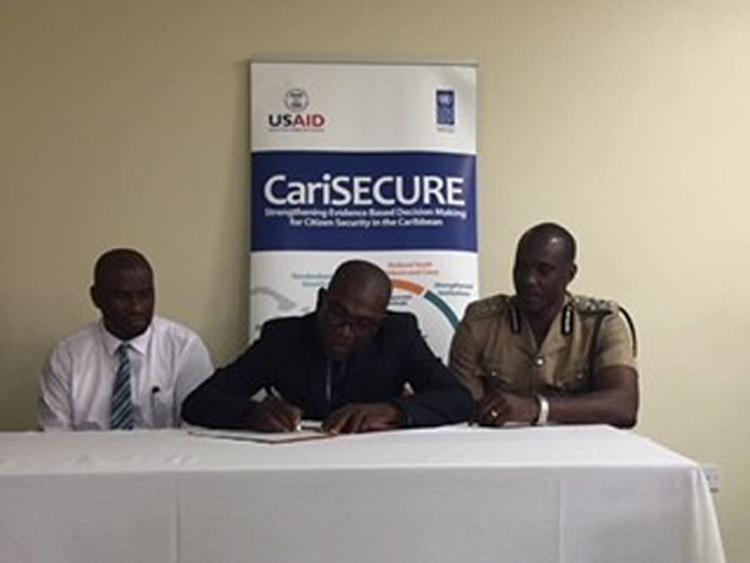 Today, Grenada became the sixth country in the Eastern and Southern Caribbean to establish a National Task Force to drive implementation of the United States Government-supported CariSECURE Project.  Since 2016, CariSECURE, which is being implemented by United Nations Development Programme (UNDP) has been promoting the use of evidence-based decision-making and fosters a reliance on valid, reliable, and comparable citizen security data.

Acting Prime Minister Gregory Clarence Bowen presided over the launch of the CariSECURE Task Force and Citizen Security Toolkit during a ceremony at the Grenada Radisson Resort. In delivering the feature address he told the gathering: “This is a watershed moment for Grenada as we embark on a journey to effectively address crime and violence.” The Acting Prime Minister also signed an agreement to officially endorse the Toolkit that will help agencies to standardize, disaggregate and share crime data under the United States Agency for International Development (USAID) project.

USAID Mission Director for the Eastern and Southern Caribbean, Christopher Cushing told the launch participants that the project supports data-driven decision making for crime prevention in the region. “Using this approach, Grenada will be in a better position to identify trends; assess crime and violence conditions; evaluate policies; and design effective crime prevention strategies targeting youth,” he said. Underscoring the need for standardized and uniform data to encourage evidence-based decision making, Mr. Cushing said the Caribbean Citizen Security Toolkit was developed for that purpose. “I look forward to hearing of your successes as this newly formed Task Force implements these toolkit instruments in Grenada. With CariSECURE’s support, Grenada will adopt cutting edge approaches to effectively addressing crime and violence at tactical, programmatic, and policy levels.”

Deputy Resident Representative, United Nations Development Programme, Barbados and the Organisation of Eastern Caribbean States, Ms. Chisa Mikami also alluded to the additional benefits offered under the Project. “The CariSECURE Project will provide public institutions in Grenada with necessary tools, including the Caribbean Citizen Security Toolkit, as well as the capacity-building and guidance they need to make evidence-informed decisions, and design policies to address the underlying causes of violence and crime.”

The Task Force is comprised of key representatives from the Royal Grenada Police Force, Prison Department, Statistical Office and the Ministry of National Security.