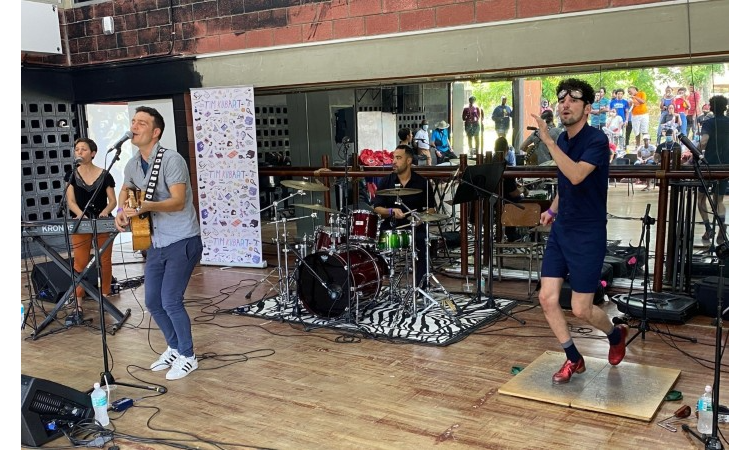 (Left to Right) Diana Lawrence, Tim Kubart, Chip Thomas, and Felipe Galganni of Tim and the Space Cadets perform during a masterclass at the Barbados Community College.

BRIDGETOWN – On Wednesday, November 11, music students from Barbados Community College (BCC) and University of West Indies (UWI) Cave Hill Campus sang, danced, and played instruments alongside Tim and the Space Cadets, a New York-based music group touring Barbados this week.  Tim Kubart, who won a Grammy award for Best Children’s Album in 2016, was invited by the U.S. Embassy to perform at schools and venues around Barbados in celebration of education during November’s independence celebrations.  Kubart’s unique sound of kid’s independent “kindie” rock music has made him a mainstay of family entertainment in the United States.  The Embassy has coordinated closely with the Ministry of Education to ensure that all COVID-19 protocols are strictly enforced during the performances.

“We are so excited to be here with you all,” Kubart exclaimed to dozens of smiling BCC students.  “We haven’t been able to perform for more than seven months. So this is really a blessing!”  The group, which also consists of pianist Diana Lawrence, drummer Chip Thomas, and tap dancer Felipe Galganni, began their tour with a performance and question and answer session with BCC music students.  The students then joined the group for a jam session and showcased their skills on instruments ranging from saxophone to flute to drums.  “I loved nerding out with the students who are drummers,” said bandmember Chip Thomas, who has Barbadian roots.  “These students were so talented!”

Later in the day, the group performed for dozens of students at the UWI Walcott Warner Theatre.  After a few songs and a solo performance by pianist and singer Diana Lawrence, dancer Felipe Galganni got the audience on its feet and taught them some basic tap dancing moves.  Galganni, who has taught as a guest instructor at The Juilliard School in New York, also hosted a workshop with UWI dance students.  To wrap up the day, the band and students benefited from an intimate conversation about the creative process of making music, tips on how to become a professional musician, and ways to break through “creative block.”

Throughout the rest of the week the group will give performances at primary schools in St. Lucy, St. Michael, and St. Andrew.  They will also perform two free public concerts at Brighton Farmers Market, St. George, Saturday, November 14 at 7:30am and Copacabana Beach Club on Bay Street Sunday, November 15 at 4:00pm.