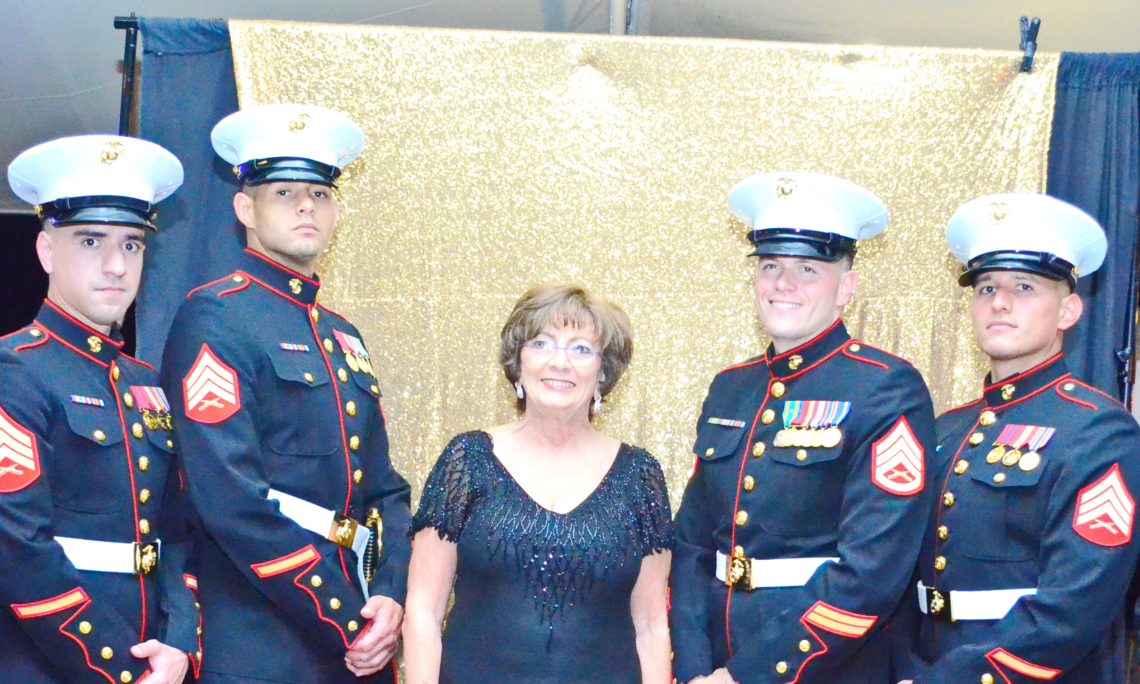 This is my third Marine Ball as Ambassador and hosting these events, ladies and gentlemen, has been among the greatest honors of my career.  In a little bit, I will read some remarks from Secretary of State Pompeo that will paint a beautiful picture of how the Marines are dedicated, honor bound, elite, patriotic, and all the other fine qualities that the Marines bring into and have instilled in them by their beloved Corps.   And, Ladies and Gentlemen, it is all true and then some.  Words cannot express the admiration I have for these fine young men and women that have chosen to serve their country so that others don’t have to.

The Secretary also notes the illustrious history of the Marine Corps as they have been a part of the United States of America’s fighting forces from the inception of our great nation.  They have distinguished themselves as our nation’s greatest warriors, protecting American lives and interests around the globe.  One of their iconic victories, Iwo Jima, has been enshrined as a monument in Arlington National Cemetery and I passed it every day on my way to work.  Who doesn’t feel that pang of patriotism when they see those Marines working together to triumphantly lift that Star Spangled Banner?  It is because that monument represents the United States as a whole, both figuratively and literally.  You not only see our values and our ideals there; you also see Marines from all walks of life, northerners and southerners, rich and poor,  immigrants and those that come from a long line of familial military service working together for a common and noble goal.

Wonderful words from the Secretary and he makes it clear that all Americans owe the Marines a debt of gratitude for their service.

General James “Mad Dog” Mattis is one of the most beloved Marines of all time.  When his Marines arrived in Iraq in 2003 he told them: “Be polite, be professional, but have a plan to kill everybody you meet.”  So every morning when I walk through those heavy doors at the Embassy and see those polite and professional young men, —-a sense of relief washes over me knowing that I have the best fighting force on earth protecting me and those that I work with.  Their service is what allows us to serve as diplomats.  Speaking of which, more than likely, this will be my final Marine Ball as Ambassador in Bridgetown, so today I want to talk from the heart and explain why I hold these fighting men and women in such high esteem.

My father was my hero and WWII veteran.  I looked up to him because he was a great man with a strong sense of duty.  At the tender age of 17 and fresh out of high school, he volunteered for the Army Air Corps and was sent to London.  Being a kid with almost no training and experience, he was assigned one of the least glamourous jobs the Air Corps had to offer; he loaded bombs onto the B-26s at night.  However, not content to be safe at the base and enjoy English hospitality (there have been family rumors of an older sibling with a British accent), my father volunteered to serve as a Bombardier aboard those B-26s and completed more than 50 missions.  Years later, I asked him what could ever possess him to volunteer for what was essentially one of the most dangerous jobs in the military and he simply replied that working at night was a drag and plus, the B-26 crews were always hanging out at the bar during the day.  I had a good laugh about that, but I knew the truth.

His service was one of the significant moments of his life and he took great pride in having fought for his country.  When his fellow veterans started having annual reunions in London he and my mom faithfully attended year after year.  And, after I moved down to Washington DC, my father would come visit on a fairly regular basis.  He would always make me go with him to his favorite museum, the Smithsonian’s Air and Space Museum.  He would also make a point of stopping by the VFW and having a beer.  His trips to DC often ended with a particular ritual; the Sunset Parade at the Marine Barracks.  When that lone Marine stood in the dying sunlight enveloped by those beautiful orange and pink hues playing taps, it never failed to bring a tear to his eye.  My dad loved his country and his time in the service.

I am happy to say, that that spirit still lives on in the young men you see before you.  I sat down with Staff Sergeant Fergusson and asked him about his motivations for joining the Marine Corps and he managed to put into words what I saw in my father’s eyes every time he attended that sunset parade.

“Becoming a Marine isn’t an ordinary endeavor, it takes dedication, commitment, passion and courage. I joined the Marine Corps to be a role model for my 5 younger siblings. I knew that becoming a Marine would instill in me the qualities of inner and outer strength, leadership, integrity and knowledge, all the tenants of a true exemplar. I now take pride in leading sections of the Bridgetown Detachment on team building exercises in interacting with the local community. The comradery and brotherhood which is at the heart of the Marine Corps is hard to miss.”

That, ladies and gentlemen, is the selfless nature that is at the heart of the US military and the Marine Corps in particular.    To all the veterans here tonight, thank you for your service.  To all those currently wearing that uniform, thank you for keeping us safe.

Please raise your class and toast with me:   Happy Birthday to the US Marine Corps!