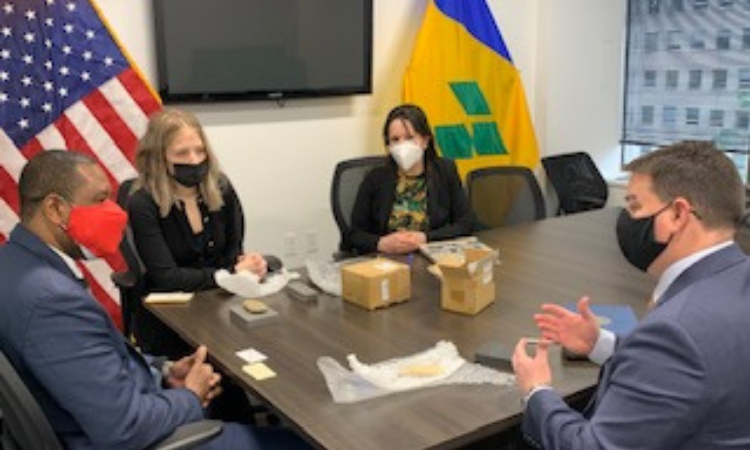 On Thursday 20 January 2022, representatives from the Federal Bureau of Investigations (FBI) returned stolen Vincentian artifacts to the Embassy of Saint Vincent and the Grenadines in Washington D.C, USA.

The artifacts from Saint Vincent and the Grenadines are tools believed to be used by the indigenous people.

The artifacts were found in a raid which was conducted in 2014 at the home of a 91-year-old missionary Donald C. Miller in the State of Indiana.

It is not certain how and when Mr. Miller came in possession of these but it is believed to be from a trip to the country in 1995.

The raid revealed tens of thousands of rare cultural artifacts which the FBI suspected may have been obtained in violation of antiquities laws.

Given the quantity, experts anticipate that it could take decades to sort through all of the objects, determine their legality and figure out where and when they were purchased. Some artifacts have already been repatriated to countries such as Colombia, Canada, Ecuador, New Zealand, Spain and China.

The return of the artifacts was done at the Embassy in downtown Washington D.C. and was received by Minister Counsellor/Deputy Permanent Representative, Mr. Omari Seitu Williams, on behalf of the Government of Saint Vincent and the Grenadines.

Provisions are being made for them to be returned to the country.