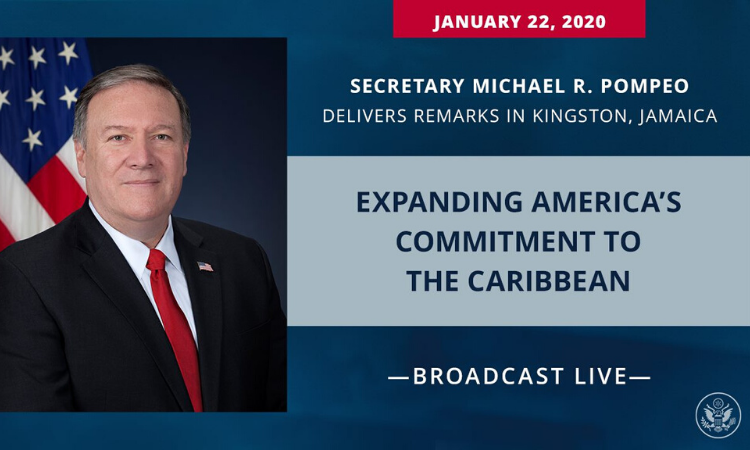 Expanding America’s Commitment to the Caribbean

SECRETARY POMPEO: Good afternoon, everyone. I was standing back there; I heard a “amen.” What better way to be welcomed to the stage?

Thank you, Madam Foreign Minister, for that kind introduction. I’m delighted to be here. My first trip here as Secretary of State; it’s my ninth trip to the region. And I’m thrilled that the United States and the region have come together in this important way.

I want to recognize a number of friends who are here with us today: Jamaican Prime Minister Andrew Holness; foreign ministers from the Bahamas, the Dominican Republic, Haiti, St. Kitts and Nevis, and St. Lucia; and I also want to say hello to Ann-Dawn Young from the AmCham Jamaica, and Keith Duncan from the Private Sector Organization of Jamaica. You’re kind enough to host this even there today. Thank you so very much for that.

The hospitality I have experienced here has been exceptional. I have now been invited – and my wife Susan knows it, too, so we’ll be here again. We’ll come back and get a chance to see the Blue Mountains and the beaches one day, probably after I’m flying all around the world with such frequency.

I very much wanted to come here. I’ve been thinking about this visit with you. I was struck in preparation for my trip by words form Luis Almagro, the secretary general of the Organization of American States, it’s what he said when he visited last week in Washington with me.

He said that, “Latin America and the Caribbean no longer are out of sight for the United States.”

It struck me that that was an odd thing to say, given that we’re such close neighbors. And yet I think he was probably right. I think for too long the United States focused on the Caribbean only when natural disasters hit. Too many U.S. officials came here to talk about aid, and aid alone.

That’s the subject of my remarks today, and then I’m going to take a few questions from Allison. I’m looking forward to it.

Look, let’s start with geography. Geography matters. It takes half the time to fly from Miami to Kingston than it does from Miami to New York. We’ve always been that physically close. But new challenges to our sovereignty and security demand that we get even closer today.

I was just in Bogota at our hemisphere’s third counterterrorism summit. Nations all across the region are waking up to the same shared threats, and there’s no shortage of them.

ISIS fighters – ISIS fighters – have come from Trinidad and Tobago. Hizballah has tentacles all over South America. FARC and the ELN take refuge today in Venezuela. The manmade crisis Maduro has caused in Venezuela has driven an unprecedented migration crisis. Nearly 5 million Venezuelans have fled his tyranny. Cuba and Russia continue to meddle in nations’ sovereign affairs, while trying to destabilize democracies. And of course, there are the drug cartels that we deal with, and the human trafficking, and arms trafficking, and the cybercrime that come alongside of them.

This is very different than the times of the Cold War. I was a young lieutenant in those days, and the challenges and the threats today that I face and we face together are very different. The bad guys are more sophisticated, and more ruthless. And our nations have an obligation, therefore, for our very people, to work in the interest of our shared security much more closely.

That’s what we’re already doing in the Caribbean Basin Security Initiative, now its 10th year, a decade on. We’re having incredible success seizing drug shipments. We’re helping kids stay away from crime. And we stand ready, America stands ready to keep doing those good things in partnership with countries in the region.

There too is – and we see this clearly as President Trump thinks about America – there’s an economic imperative for getting closer. We’ve long been bound together by commerce. The foreign minister talked about the United States being the largest trading partner in the region. As just one example, asphalt from Trinidad and Tobago makes up the pavement of Pennsylvania Avenue that connects the White House and the United States Capitol.

But our economic ties aren’t defined by government aid, or remittances from members of your communities that have come to the United States. We want to build economically sustainable economies – and it is possible.

That success begins with good policy, sound policy. You all know the answer: respect for the rule of law, property rights, a business culture that is friendly to entrepreneurs and risk-takers. We know you’re working on all of these things, and we are happy to help. We want the best for your people.

Strong economic ties, too, matter in another crucial way. I talked about this in a speech that I gave in California last week. It’s these ideas, this imperative is as true for St. Lucia as it is for Silicon Valley where I gave those remarks.

It’s tempting to accept easy money from places like China. But what good is it if it feeds corruption and undermines your rule of law? What good are those investments if in fact they ruin your environment and don’t create jobs for your people?

There’s a better alternative. We all know it and we can all achieve it together. Western firms, American firms operate according to values proven to produce good deals and quality work, the work that we do in democracies, things like transparent contracts, the respect for the rule of law, honest straightforward accounting practices. That’s why I’m proud to be America’s Secretary of State and advocate for American companies to come and want to participate and invest in places like Jamaica and the region.

Look, some of those great businesses are represented here today. They reflect our sincere desire for a partnership in prosperity. We can grow all of our nations together. It’s why we have launched what we now call the Growth in Americas initiative.

Jamaica was a charter member during the December kickoff in Washington, and we look forward to including more countries. We want to help each of your countries catalyze private investment in infrastructure.

We’ve created a new Development Finance Corporation that works inside of our State Department. It can help your private sector stand on its own. Just one example. We look forward to working with Haiti to identify how the DFC financing can help its economy.

It’s true, too, that our values are also gaining steam in the energy sector, where we’re expanding collaboration. That’s important. It reduces costs for consumers and for businesses. PetroCaribe is fading into the sunset, as the Maduro regime itself will do.

That brings me to another reason that it’s time for a deeper relationship – the centrality of our democratic principles, the way we think about human life.

It’s clear that this hemisphere is moving towards freedom, more than we’ve ever seen before, from Brazil to what happened in the past few months in Bolivia. People are demanding democracy and freedom.

We see that most clearly in how nations of the region have reacted to the Venezuelan crisis. Only the dictators of Venezuela, Cuba, and Nicaragua think people should live under an authoritarian fist, in a failed economy, where benefits go only to the corrupt elite.

I know many Caribbean nations, like St. Lucia and Curacao, have hosted individuals who have fled Maduro’s authoritarianism. For every nation who has taken these people who are under such deep challenge, thank you.

I was with President Guaido on Monday in Colombia. We talked about how much support he has received from this hemisphere. He wanted me to thank all of you in this room today.

We are indeed moving towards closer ties.

Look, we’re not going to ask any of you to take on these challenges alone. The Trump administration is action-oriented. Endless discussion and empty promises won’t protect our security, our economies, and our freedoms. I think the foreign ministers who met with me today can see we’re pretty straightforward.

So President Trump has taken it on himself to host five leaders for an important dialogue last year at Mar-a-Lago.

Right here in Jamaica, we’ve expanded our cybersecurity partnership. There remains much more good work to do together.

And this morning the prime minister and I agreed on the importance of getting it right. We’re pushing forward with the Caribbean 2020 strategy that we launched back in 2017.

The U.S. and 18 countries in the region formed the Resilience Partnership, so that we can respond before the storm even hits.

The United States too has helped rescue 400 Bahamians from the ravages of Hurricane Dorian, on top of providing about 34 million in humanitarian aid.

My faith, my faith teaches me that there’s nothing nobler than helping your neighbor. America believes in that, too.

I’ll finish up quickly so we can get to some questions. I know the people of this region are capable of big things. You all need to believe that yourselves as well. I know that you do.

I want to tell you about Tishon Thomas, who grew up in an orphanage in St. Kitts and Nevis. At age 13 he found his passion for technology. He said, “I started pulling ‘HTML for Dummies’ off the shelf.” He went on to work for some of the biggest companies in St. Kitts until he realized he could be his own boss.

The United States Young Leaders of the Americas initiative helped him expand his IT business and to double his staff. Thomas’s big dreams aren’t so different from those of another orphan from St. Kitts and Nevis – Alexander Hamilton, one of the American founding fathers.

America stands for partnership. We’re natural friends. We are natural allies together. What better time is there for us to move towards closer ties?

Thank you, and I look forward to some questions and a good conversation today. Thank you all so much.