As a sponsor of AnimeKon Expo Lim8less 2017, U.S. Embassy Bridgetown held The “Design a Bajan Superhero Contest”. Participants were required to submit an original piece of artwork depicting a Barbadian (Bajan) superhero along with a brief description of their hero’s origin and powers. The judges were delighted by the high standard of the entries received. 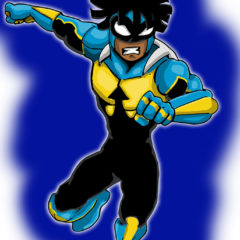 Born in a family of heroes, De-man/ Edward Smith, takes up his father’s legacy after his sudden passing. In his debut as a hero, he gets into a huge battle in the city of port town with the monstrous Sargassum-mon. in which he teams up with a group of bajan heroes The Heritage Warriors and prove himself to be a valuable ally in the fight. The after events didn’t go as well he hoped when an interview, with a reporter he was about to announce himself as the new justice trident (his father’s superhero name), when an excited group in the crowd started talking about his heroics and was unintentionally mislabel him as De-Man. His main goal is to become a member of the heritage Warriors the group his father once led.

Due to an unknown circumstance Edward can’t use his powers as normally as his father before him could. So his grandfather created his suit to be able to help him bring out his powers dub the Coast of arms 2.0. 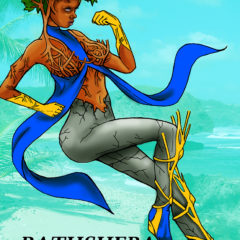 Bathsheba was created from the landscapes of Barbados by the 3 deities personified as animals. Frog, Lizard; who guarded the land and air as well as Shark who protected the people and the sea from evil.  They gave her the name because of the entrancing beauty and aura the island possessed. She exists separately from the land and can transform into her human like form at will. Eventually, the humans no longer worshiped or believe in the 3 God which weakened their powers and they were turned to rocks. They now rest and sit at the top of the shoreline at the edges of the land.

When Barbadians abandon the 3 Gods, they were sent into turmoil and corruption by the evil Giant, Daborus, the fearless.  She defeated him by making him one with the land and he is now known by the people as the “sleeping giant”. The islanders showed their gratitude by making sure the land was always clean and well cultivated.

Bathsheba can control and manipulate earth and her body; transform anything from people to inanimate objects into forestation or stone. She can also communicate and conjure plants to fight alongside her. The sun is her main source of power. It hardens her skin and muscles therefore acting as a shield that cannot be pierced. Sheba has no major weakness. Sea waters can erode her body but no severe damage. However, if someone were to destroy the rocks that were once gods, she would no longer exist. 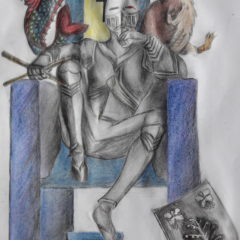 "The Silver Knight" by Simone Williams

“Fight for justice, fight for pride and industry”. Using the Barbadian coat of arms as inspiration, the Silver Knight was created. We always saw the helmet, but what does it represent? I think it represents protection. Who’s better to protect you than a hero? Having the pelican and dolphin as allies, what could go wrong? You have help on land, in the sky, and underwater. Other than the crossed canes and shield for physical protection he also has the ability of shooting lasers from his eyes which can slice any solid object. He was created by Mr. Neville C. Connell in the year 1966. For 50 years he has been our hero. 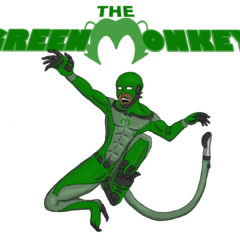 "The Green Monkey" by Jaron Griffin

Marcus Greenridge was a straight A student studying technology and engineering at UWI. He had lost his father due to violence from the recent rise in crime.

Many months had passed, and no leads had been found about his father’s killer. Frustrated, Marcus made a crazy decision to track down the killer himself and bring him to justice.

Starting out as a powerless vigilante wearing a face-mask, he quickly realized that the criminals he would have to deal with were far more dangerous than he expected.

Having another crazy idea, he was able to convince some of his classmates to help him with an idea he had for an endo-suit to make him stronger, but also protect him from enemies. 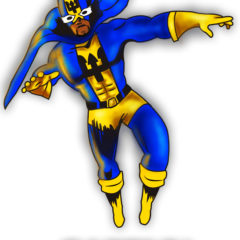 Captain Barbados’ alter ego is Tony Benson a young Barbadian scientist who specializes in solar science technology. Considered a nerd and weakling by his peers, Tony found himself being heckled at a party in company of his date. Angered by the thought of the embarrassment he suffered, Tony vowed that never again would persons be able to beat up on him without him being able to defend himself.

Returning home, Tony conseptualised an idea that since the sun’s energy has been harnessed by man to power various forms of machinery it should be able to be harnessed to increase his physical strength. From that night on, he was engaged in much research and experimentation as he materalised his idea resulting in him designing hundreds of tiny solar devices which he attached to his body to accelerate his body chemistry.

One fateful day, Tony tested out his invention on himself in full blaze of sunlight. The solar powered devices worked as envisioned as they increased his strength more than a hundredfold enabling him to bend a 40mm steel bar! But them something went wrong, the devices overcharged, fused to his body and permanently burnt themselves into his muscle tissue likewise enabling him to be permanently energized with super strength from sunlight.

In time Tony began to use his new found super powers not only to defend himself but all law abiding Barbadian citizens as Captain Barbados!