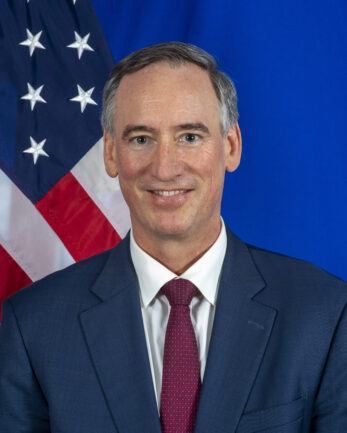 Dave Schnier assumed his role as Deputy Chief of Mission for the U.S. Embassy in Bridgetown, Barbados in July of 2021.  Prior to that he served in the Office of the Secretary of State as Director of the Executive Secretariat Staff, where he directed the planning and execution of the Secretary’s travel, along with the preparation of action and information memoranda for the Department’s top leadership.

Prior to that Mr. Schnier served on the White House National Security Council as Director for Brazil and the Andes, and Counselor for Economic Affairs at the United States Embassies in Manila, Philippines, and in Lima, Peru.

Earlier in his career Mr. Schnier served as Special Assistant to Under Secretary of State Bill Burns, where he promoted U.S. national security interests in Latin America.  He has also served on detail in the Office of the Secretary of Defense at the Pentagon, as Staff Aide to Assistant Secretary for Western Hemisphere Affairs Tom Shannon, and as Senior Brazil Desk Officer.  Earlier in his career he served as a Political, Economic, and Consular officer at the U.S. Embassies in Rabat, Morocco, and Accra, Ghana.

Prior to joining the State Department Mr. Schnier was an International Trade Specialist at the U.S. Department of Commerce in Washington, DC, working in the Office of Latin America and the Caribbean.  From 1991 to 1995 he was a journalist in Santiago, Chile, and a teacher in Bogota, Colombia.