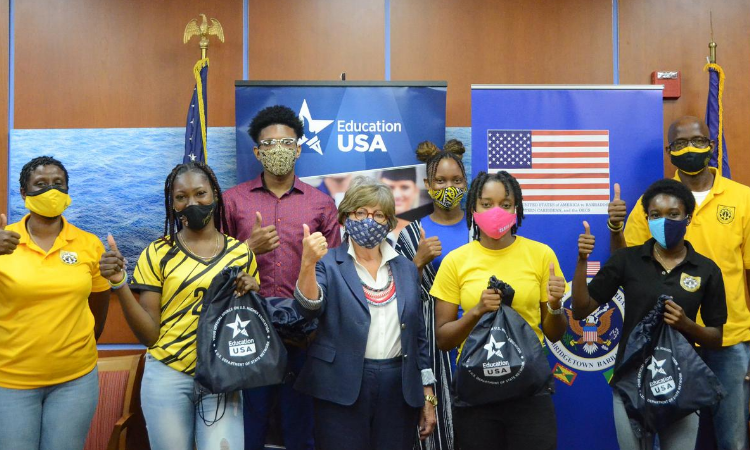 “This is a wonderful opportunity, so really take advantage of it,” Ambassador Taglialatela advised, adding that studying abroad in the United States was also a chance for the students to develop their own independence. “But you have to make sure you call your parents every now and then, too,” she joked. The Ambassador urged the students to observe social distancing, wear masks when in close proximity with others, and follow all health advisories, but said even with the new protocols in place, there were plenty of experiences and adventures to be had.

Coach Seibert Straughn noted how proud he was of the group, who are some of the most talented student-athletes with whom he has worked, adding that many of them excelled in multiple sports at CCFS. Both coaches, Straughn and Blackman, are members of the Hall of Fame at their U.S. alma maters, Murray State University in Kentucky and Southern Illinois University, respectively. Coach Straughn thanked the Ambassador for the support of EducationUSA in preparing for the students’ departure.

The student-athletes will join thousands of students who come to study in the United States from around the world each year. According to the Institute for International Education, about 1.1 million foreign students attended U.S. colleges and universities in the 2018-2019

school year, making up 5.5% of the entire U.S. higher education enrollment. Jaliyah and Nathan will major in kinesiology, Chanté in liberal arts, Selena in business administration, and Keinelle in psychology.