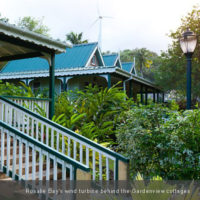 Built by hand, Rosalie Bay Resort was the first luxury hotel on Dominica. Forty-five minutes from the capital city Roseau, it features spacious accommodations, organic cuisine, and a personalized wellness program. The resort is committed to educating tourists while implementing eco-friendly practices at its facilities. Rosalie Bay organizes an annual “Beach Clean-Up Day” which coincides with Earth Day, and in April 2012, it collaborated with the Nature Enhancement Team to sponsor a beach cleanup for the sea turtles that frequent the island’s shores. Rosalie Bay supports three species of endangered sea turtle in Dominica, the Leatherback, Green, and Hawksbill. Through the Rosalie Sea Turtle Initiative, the business provides the animals with nesting grounds and sets up protection hotlines. The resort promotes its dedication to wildlife to customers, encouraging guests to take part in educational walks along the beach and providing night guards to protect the nesting animals.  Guests can even ask for a ‘wake-up call’ when hatchlings make their way out to the sea.

Rosalie Bay is an environmentally conscious business, utilizing alternative energy to power its facility. With 96 solar panels and a 225 kW wind turbine, which is the first wind turbine on Dominica and one of the largest in the Leeward Islands, the business is a prime example of eco-friendly commerce. An additional 106 solar panels, which are 50 percent more efficient, are to be installed later this year.  Such progress is made possible due to Rosalie Bay’s groundbreaking agreement with a local power company regarding self-generated power and power sales, opening the door for other Dominican businesses to do the same.  Most importantly, Rosalie Bay’s reliance on renewable energy addresses a serious issue in Dominica, where the cost of energy is among the highest in the world, and energy costs amount to approximately 15% of gross domestic product.

Dominica’s economy relies on eco-tourism; depending on businesses such as Rosalie Bay to attract visitors to the self-promoted “Nature Island.” Tourism the country’s largest export sector and Prime Minister Skerrit has emphasized the government’s commitment to developing the struggling industry. Dominican tourism is overshadowed by sandy beaches on neighboring islands, despite the country’s renowned rain forest, mountains, and lush vegetation. Eco-tourism could propel Dominica into prosperity, and businesses like Rosalie Bay are essential to that strategy. In its remote location, the resort relies almost entirely on local labor, using U.S.-level labor standards in provision of employment. The business provides a much-needed source of employment and training to the community which has been negatively impacted by the decline of the banana trade industry. Moreover, the majority of Rosalie Bay’s artwork and buildings were created and built by resident artisans. 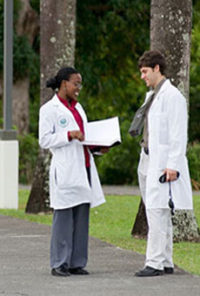 Both universities are dedicated to supporting their surrounding communities. In Dominica, RUSM students founded the Salybia Mission Project in 2002, whose objective is to provide basic health care to the Kalinago community. The Kalinago territory is home to about 3,500 descendants of the largest group of aboriginal peoples in the Caribbean. The founding physician, Dr. Worrel Sanford, is an adjunct faculty member of RUSM, and is the first indigenous person to become a physician on Dominica. Furthermore, for the annual National Coastal Cleanup event in St. Kitts, RUSVM donates trash bags, gloves, and personal time to assist with clearing the beach. In addition, RUSVM has donated approximately 2,000 books to the Cotton-Thomas Comprehensive School library collection. The donated books were provided to elementary school children, and the university is committed to helping this fledgling library grow into a reliable educational resource for students.

RUSVM employs more than 240 Kittitian citizens, and provides employees with tuition benefits from DeVry in order to pursue their educational goals. In Dominica, RUSM is one of the largest businesses, currently employing 317 Dominicans with similar educational benefits as in RUSVM. To date, over 80 degrees have been awarded to RUSM employees through the tuition benefit program. Additionally, the university annually provides four medical scholarships to Dominican nationals who have been accepted to a medical school in the U.S., encouraging students to further their education and to make a contribution to the health and socio-economic development of Dominica. 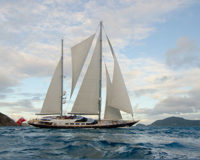 Christophe Harbour works with a number of U.S. based engineering, legal and marketing firms to advance the development of its project in St. Kitts. The company has spent millions of dollars working with these firms for the advancement of the Christophe Harbour development, helping boost parts of the American economy and increasing business for these entities during tough economic times. Christophe Harbour has so far injected over $100 million into the St. Kitts economy. Its development has attracted a diverse workforce of approximately 100 employees (both direct hire and contractors), and continues to serve as a one of the largest employers in the Federation. Its real estate marketing also encourages U.S. direct investment in St. Kitts in Nevis, attracting American buyers for its real estate offerings.

Christophe Harbour is a large contributor and supporter of the St. Kitts and Nevis Chamber of Industry and Commerce, and is a founding member of a Rotary Club initiative entitled the Advancement of Children Foundation. Christophe Harbour also operates The Christophe Harbour Foundation (CHF) to undertake community outreach projects in St. Kitts and Nevis in order to strengthen and develop the social, physical, cultural and natural environment. Since its inception in 2008, the CHF has distributed over US $100,000 in grants to local charities. The company has written into its covenant that the Christophe Harbour development will ensure that every property sale contributes a percentage to the Foundation, to ensure its future operations and impact. The work of the CHF includes supporting conservational, educational, recreational, cultural, historical and social development projects that will enhance the environment and lives of the people.