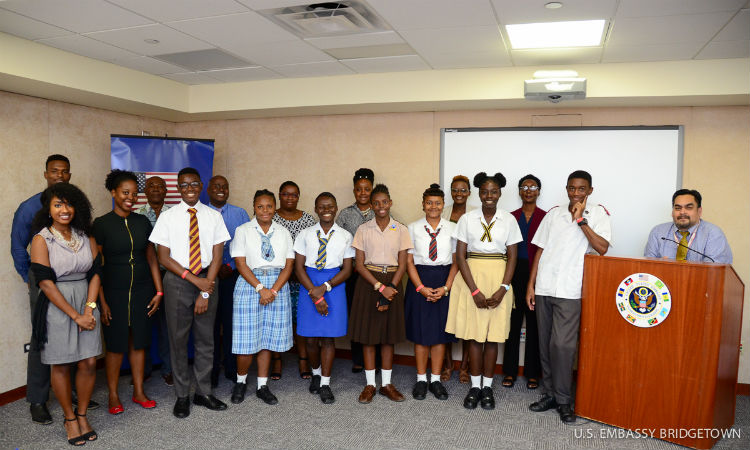 Each February, Black History Month celebrates the contributions made by persons of African descent, and celebrates the defining moments in their history that have shaped society. The youth represents the future decision makers, innovators and leaders of a nation. They are a vital voice, who in the face of emerging unprecedented challenges, employ unique means to cope with and bring these challenges to light. By providing forums and opportunities for youth to share their perspectives, they can suggest solutions and options based on their distinct perspective and mobilize their counterparts to be active change agents.

In recognition of Black History Month 2019, U.S. Embassy Bridgetown invites interested Barbadian secondary schools to nominate one student (ages 14 to 16 years) to deliver a five minute speech in response to one of the questions listed below.

Students will select one prompt from the five options provided below. Students should conduct the necessary research, under the guidance of their faculty advisor, to present a thorough but concise argument to a five-member judging panel comprised of U.S. Embassy officials.

Competitors have five minutes to present their speech, and four minutes to respond to the judges’ follow up questions. Time limits will be enforced. Full competition rules and judging criteria can be found in the attached Black History Month Speech Competition Regulations.

Speech Prompts: Prepare a five minute response to one of the prompts listed below.

Students have the opportunity to win an incredible grand prize package valued at $1,000 USD for their school and themselves! Prizes will also be awarded to second and third place students.