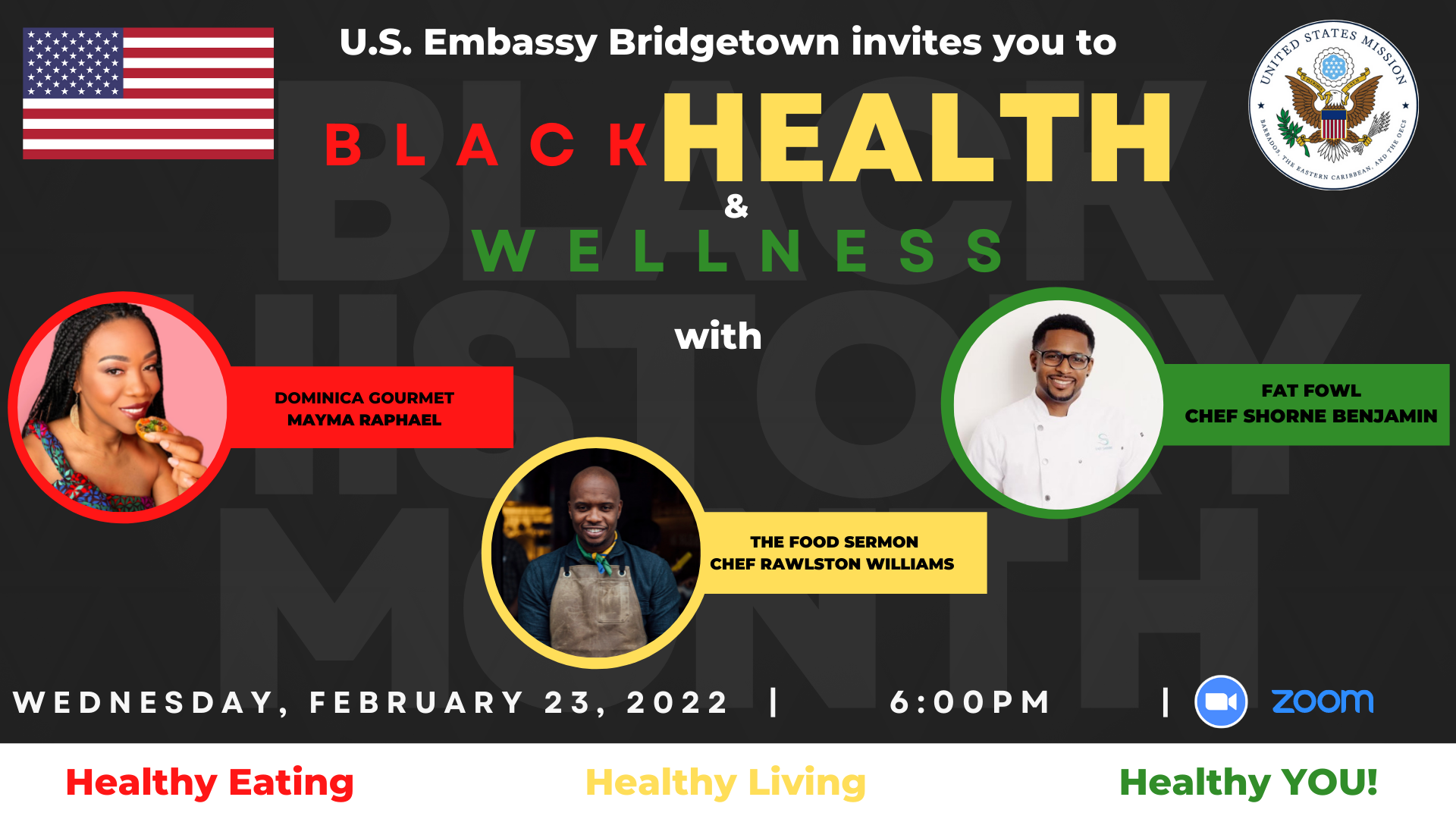 The U.S. Embassy invites you to our culinary focused Black History Month Program “Black Health and Wellness” on Wednesday, February 23 at 6:00PM.

The Food Sermon Chef Rawlston Williams, The Fat Fowl Chef Shorne Benjamin, and Dominica Gourmet Mayma Raphael will share their culinary experience, healthy food recipes, and mental health and wellness tips to inspire and motivate you to a healthier you!

Brooklyn-based chef Shorne Benjamin is proof that life is not necessarily linear. The St. Lucian born chef left the island in his late teens to study finance at New York’s Mercy College in 1998, eventually making his mark as a successful stockbroker. But the trajectory of his career soon changed after the global financial crisis in 2008. The turbulent time forced Benjamin to reevaluate his future and gave him space to get reacquainted with his culinary skills, a passion that was nurtured while growing up with his grandmother in St. Lucia.

Bolstered by a renewed sense of purpose, Benjamin enrolled in culinary school and has since carved out an impressive career in the food industry. In the past few years, he has worked alongside renowned Master Chef Jean George and James Jermyn, done a showcase for New York’s Food and Wine Festival, participated in the Taste of Montréal festival, the 11th Annual Iron Chef Competition in Toronto, Haitian Food & Spirits Festival, and the James Beard Dinner Series: Caribbean Sensation, served as Executive Chef for the Annual Rum and Rhythm Benefit hosted by the Caribbean Tourism Organization in New York, and has appeared on the Food Network’s Beat Bobby Flay and Chopped.

Born on the island nation of St. Vincent and the Grenadines, raised in Brooklyn, and trained at the French Culinary Institute, Chef Rawlston Williams offers an elevated, forward-thinking take on Caribbean classics, a unique approach influenced by the chef’s worldly background and free-spirited life experiences.

After immigrating to New York at ten years old and living in the East Flatbush neighborhood of Brooklyn, Chef Williams studied theology at Oakwood University in Alabama, a private university operated by the Seventh-day Adventist Church. While faith still plays a large role in his life, he found his true calling in the kitchen. After graduating from New York’s famed French Culinary Institute (now the International Culinary Center) Williams opened the first Food Sermon location in 2015. Originally intended to be a small outpost for his catering business, the pint-sized restaurant quickly attracted loyal neighborhood fans, soon drawing the attention of food critics (The New York Times’ praised Williams “gift for meat” and “extraordinary brightness of flavors.”)

Saka fete! Growing up in Dominica, food was central to socializing and in abundance. Cooking with my family was one of the highlights of my youth. We grew our produce and raised livestock, which often made it to our kitchen table. With my mother and grandmother’s guidance, I discovered my passion for cooking at age 9. Today, I share those culinary experiences with my children, using the fundamentals of Dominican cooking and making it our own. As I embark on my food journey, I invite you to experience foods from the Caribbean Island of Dominica. Let’s cook!