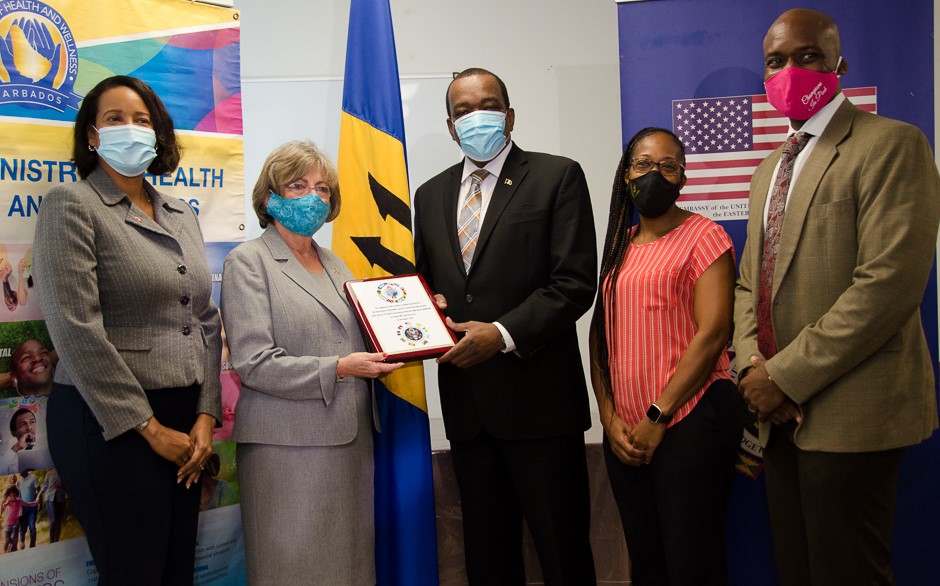 On December 7, Barbados Minister of Health and Wellness Jeffrey Bostic joined U.S. Ambassador to Barbados Linda Taglialatela to mark the successful completion of the United States President’s Emergency Plan for AIDS Relief (PEPFAR) program in Barbados. The ceremony celebrated the over nine years of cooperation between the two countries in combatting HIV, and which has led to increased preparedness in Barbados’ ability to contain other viruses like COVID-19.  Other local and regional partners also attended the event, including Barbados Chief Medical Officer Dr. Anton Best, Director of the Best Dos Santos Laboratory Songee Beckles, Representative of the U.S. Centers of Disease Control and Prevention (CDC) Giselle Guevara, and President of the LGBTI rights group EQUALS Michael Rapley.

Minister Bostic thanked the U.S. PEPFAR program for helping Barbados develop a comprehensive HIV program, including a US$6 million donation to build the Best Dos Santos Laboratory. This laboratory not only analyzes HIV tests, but also plays a central role in the country’s fight against the COVID-19 pandemic. “We have witnessed the enduring commitment of PEPFAR and the CDC to improving health programs and capacities in Barbados,” he said. “As a result of (the Best Dos Santos lab), Barbados now has the capacity to act as a resource center for the region in the treatment and control of HIV and other communicable diseases.”

Ambassador Taglialatela stressed the meaningful contributions PEPFAR has made throughout the globe. “When PEPFAR began back in 2003, HIV/AIDS was a death sentence in many parts of the world,” she noted. “Since then, AIDS-related deaths have been cut by 60% since the peak in 2014…Working together with partners in 54 countries, including Barbados, we have moved the HIV/AIDs pandemic from crisis towards control.”

Mr. Rapley explained that, thanks to PEPFAR funding, EQUALS opened a community center where people can receive rapid HIV testing and social counseling services. EQUALS and the Ministry of Health also carried out campaigns to reduce stigma and discrimination about people with HIV, reaching nearly 1,000 people in the last three years alone.

PEPFAR has worked with Barbados to institutionalize STI/HIV surveillance systems, track national spending on HIV-related programming, and enhance the quality and accuracy of national clinical data. On a local level, PEPFAR also coordinated closely with the Ministry of Health to strengthen relationships between civil-society organizations like EQUALS, and tailor health services for members of key populations acutely affected by HIV.

Since its inception in 2003, PEPFAR has invested more than US$80 billion into treating HIV/AIDS throughout the world, especially in developing and vulnerable countries. PEPFAR is credited with saving more than 18 million lives, prevented millions of HIV infections, and helped more than 50 countries manage the HIV/AIDS epidemic.