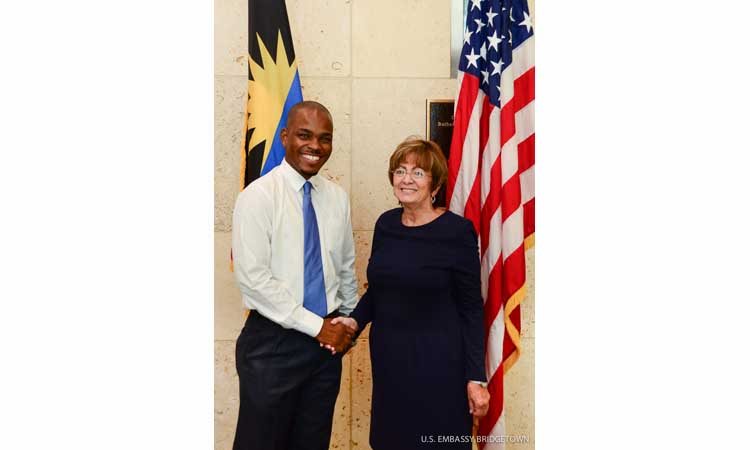 Michael Joseph (left) poses with U.S. Ambassador to Barbados, the Eastern Caribbean, and the OECS, Linda Taglialatela before he departed on his IVLP program on “Foreign Policy and Human Rights.”

Michael Joseph, president of the Antigua and Barbuda Red Cross Society, is currently in the United States participating in the U.S. Department of State’s International Visitor Leadership Program (IVLP). He is taking part in a three-week project on “Foreign Policy and Human Rights” from April 23 to May 12.

Michael, a trained pharmacist, has been president of the Antigua and Barbuda Red Cross Society since 1999. For the past two years, he has been the managing director of Medicapharma Supplies Ltd.

During the program, participants will examine human rights as a core component of U.S. foreign policy and explore the efforts of public- and private-sector organizations to address international and domestic human rights issues. The project will support the Department’s strategic goal of supporting human rights as fundamental to global health and wellbeing.

Michael will join his counterparts from 20 other countries, including Tajikistan, Croatia, Algeria, and Trinidad and Tobago, and they will examine a range of topics such as freedom of expression, children’s rights, the protection of ethnic, religious and racial minorities, LGBT rights, freedom of religion, and freedom from torture and abuse. The project will illustrate strategies used by NGOs, faith-based organizations, advocacy groups and federal, state and local government agencies to formulate, champion, and influence human rights policy in the United States and in its foreign policy.

The program began on April 23 in Washington, D.C., and includes travel to at least four cities across the United States including Charlotte, North Carolina; San Antonio, Texas; San Diego, California; and New York, New York. The program ends in New York on May 12.