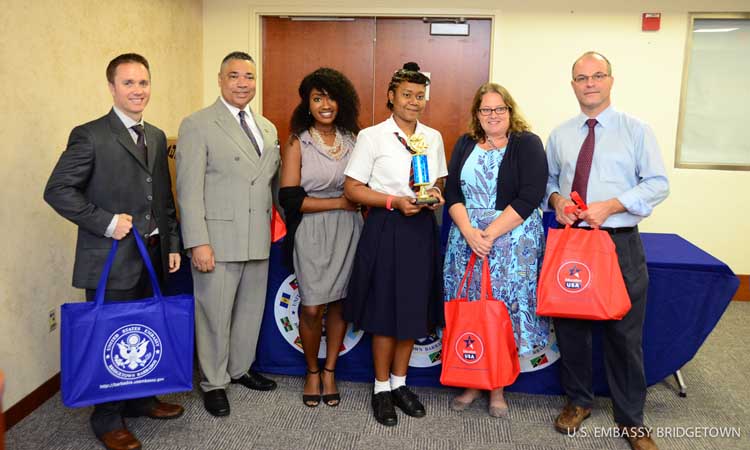 U.S. Embassy Bridgetown is pleased to announce that the winner of its inaugural Black History Month Secondary School Speech Competition is the Alleyne School. Fourth-form student Shamera King-Charles brought it home for her school, as she spoke about the value in continuing to observe the achievements of various ethnic groups in prescribed months.

Judged by a panel compromising U.S. Embassy officials, the competitors, who also included students from Springer Memorial, St. Michael, Ellerslie, and Harrison College, debated on various themes focused on Black History Month.  They all used the forum as a platform to share their perspectives and solutions.

Public Affairs Officer James Rodriguez commented, “The U.S. Embassy hosted the event in honor of Black History Month. Speech and debate make up a vital part of America’s cultural fabric. The impressive legacy of powerful black orators in the United States goes back to the founding of that nation and ranges from abolitionists, escaped slaves, to the leader of the free world. These men and women have had a profound effect in the shaping of the United States. As such, the U.S. Embassy is proud to recognize and celebrate the achievements and contributions made by people of African descent through this competition.”

The contest supported the U.S. Embassy’s goal of promoting education as a driver of sustainable economic growth, and as a means to foster innovation and empower youth.